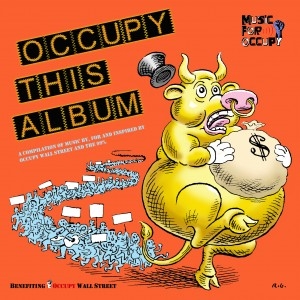 There is no doubt Occupy Wall Street generated a lot of press from the many musicians who performed for the protestors or made an appearance to show their support. Now, despite many of the protests being shut down due to government restrictions or inclement weather, the spirit is still thriving.

It was announced Monday that an all-star collection of artists came together to create Occupy This Album: A Compilation of Music By, For and Inspired by the Occupy Wall Street Movement and the 99%. It is planned for release this spring.

The record will feature music from Debbie Harry, Willie Nelson, Third Eye Blind, Yoko Ono, Crosby & Nash, Yo La Tengo, Our Lady Peace and numerous others. Many of the contributors performed at the New York Occupy Wall Street site while it was active.

â€œAll proceeds received from the sale of this work will go directly to the Occupy movement,â€ says the press release.

The Occupy movement rapidly progressed from a beginning act in New York into an international grassroots effort and is now taking place in 951 cities in 83 countries including Europe, North America, South America, Asia and Africa. Producers hope this will inspire the protestors and help provide funds to keep the movement going.

The hilarious album cover was designed by political cartoonist and illustrator Robert Grossman.

The full roster of artists on Occupy This Album: