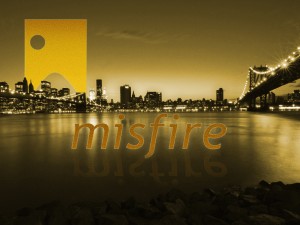 Review Fix’s Steve Janowsky continues his Q & A with Misfire.

Review Fix: Richie, in late 1977 Misfire was gaining popularity through its live shows in New York clubs and was negotiating with a record label for a debut album. You decided to leave the band at that time for personal reasons. Can you elaborate, and do you have any regrets?

Primavera: I realize that by the time you came across Misfire in the ’70s I had already left the band and you never saw the first edition of Misfire; however I will tell you it was an interesting time! We had spent much time writing, rehearsing, and honing our sound. I recall we went to some Manhattan venues too, and got a good look at the music being made by others. I guess it was a sort of gauge: a means of establishing how we compared to other bands. We were antsy and needed some gigs, as we believed we had a lot to say musically. We initially auditioned at CBGB’s and got a very positive reaction from theÂ audience. This led to additional billings there. Additionally, we started playing at a basement venue near the Electric Ladyland recording studio on West 8th Street named “Copperfieldâ€™s.â€œ Playing live with other bands further pushed us to develop a “tight” sound/performance, as there is always a competitive side to sharing the stage whereby you want to be remembered as the band that “blew out” the others. While our tunes were straight ahead, big beat, and guitar driven, Frank and Pete began experimenting with a more orchestrated sound. I truly had little desire to sound any bit like Rush, Queen or ELP.

Keep in mind this did result in some protestations from me.That being said, I had tremendous loyalty and camaraderie to and with my band mates until a new girlfriend came into my life. Things got serious and she had a dim view of me gigging and being out late evenings. She essentially drove a wedge between me and my band mates, and I did little to stop it. It’s ironic that I got hitched so to speak and less than nine months later the marriage was annulled when I walked out. I did make an effort to check out Misfire as a power trio at a Brooklyn College gig. Their sound took a detour from what it was while I was in the band and not necessarily a course I would have sought to lead the band to. However it did feel weird not being on stage with my band mates. Of course I have regrets.

Review Fix: Who were your early musical influences?

Prinzivalli: Well, I hate to date myself but I was one of those kids who wanted to learn to play guitar after seeing the Beatles on the Ed Sullivan show. Then when I met Frank in high school, he turned me on to all the great classic rock bands of the era: Sabbath, Purple, Aerosmith, Kiss, and of course, our favorite, Led Zeppelin. We wore the grooves out on those albums trying to copy those licks. So this whole thing is Frank’s fault.

Review Fix: Which guitarists stood out?

Prinzivalli: I respected them all. Beck, Perry, May, Lifeson all come to mind and the list goes on and on. Clapton and Page had a tremendous influence on me, but there are two guys who to this day make me feel like I have no business playing, Stevie Ray Vaughn and Eddie Van Halen.

Review Fix: Which drummers stood out?

Saluzzi: For me, the number one guy always was and always will be Carl Palmer, but this list goes on and on and includes Bill Bruford, Steve Gadd, Neil Peart, Keith Moon, Ian Paice, Phil Collins, and Tommy Aldridge. Moreover, being both a jazz and Big Band fan, I must also cite the great works of Elvin Jones, Buddy Rich, and Gene Krupa as significant influences as well.

Primavera: I always appreciated how Robert Plant played with the texture of a song. His treatment of certain songs will never be replicated. In addition, Jimi Hendrix, while always known for his axe-work, also possessed the ability to “stamp” a song with his vocals as I see it. Subsequently, if I had to pick only one undeniable influence it would be, in my humble opinion, Iggy Pop, whose combination of singing style and histrionics, when he was in his prime, could not be matched nor imitated.

Verrico: Let’s see if I can answer this one without dating myself. I grew up in the days of AM radio. In the morning Mom would be listening to William B. Williams, a DJ that played everything from Sinatra to the Big bands, and everything in between. The only young people’s radio stations were WABC and WNBC, and these two stations played a mixture of Motown and Rock, so you could be listening to the 5th Dimension one minute, and to the Crazy World of Arthur Brown the next. Of course they also played the Beatles, Hermanâ€™s Hermits, Paul Revere and the Raiders, the Grass Roots, and the Supremes. A couple of songs that really grabbed me were “Whiter Shade of Pale,” by Procol Harum, “In-a-Gadda-Da-Vida,” by Iron Butterfly, and “Whole Lotta Love,” by Zep. These songs gave me the urge to start playing music. Of course by the time I hit high school I was really turned on by Yes, E.L.P., Alice Cooper and Black Sabbath.

Review Fix: How did the four of you take those influences and develop your own original style?

Prinzivalli: I donâ€™t think you can set out to develop a â€œstyleâ€ as a band or as an individual musician. â€Styleâ€ is just something that naturally develops over time, and trying to force it is futile. The greats we mentioned inspired us and those that came before them inspired them, and so on and so on and so on. Even the first rock acts were offshoots of country, blues and jazz. That said, I do envy the guys who were lucky enough to work with the first really functional electric guitar and amp combinations. Guys like Les Paul, T-Bone Walker and a little later Chuck Berry. Then, of course, Harrison, Clapton, Beck, Hendrix and all those â€œclassic rockâ€ guitar pioneers started experimenting with various sounds and techniquesÂ including overdrive and distortion. They had a wide-open field and broke a tremendous amount of new ground, but still their roots were firmly planted in the blues legends before them. By the time Misfire first formed in 1976, what we now call the â€œclassic rockâ€ genre was in its second decade, and there was already plenty of history to leave quite an impression on us, but somehow I think we manage to give it our own â€œsignature.”

Saluzzi: Wow, that’s a pretty tough question, Steve, because “style” is such an elusive thing to identify and to describe, and yet it is often very easy to recognize when you hear it! This may sound contradictory, but when you hear guys like Steve Gadd, Bill Bruford, John Bonham, and Elvin Jones, one instantly knows it is they who are playing just by their “style.” In my own personal case, I never really attempted, or even wanted, to pattern myself after any other drummers,Â however it seems unavoidable. There were times when I attempted to emulate riffs, licks, and techniques from some of my favorite drummers, but then also tried to impart my own “style” to them. Therefore, my “style” was directly influenced by the “styles” of those who came before me. I think this is true of probably all musicians; we try to be as original as possible, but are ultimately influenced by those other musicians to whom we have always listened. I think this same concept holds true for bands, as well as individuals.

Primavera: In my opinion, musicians constantly take from each other, thus creating hybrid on top of hybrid. It is natural and never-ending. As individuals, and collectively, we are no different, and you are witness to this “evolution” when you listen to “Reckless” now and then as an example.

Verrico: I provoked Richie at rehearsals and gigs. I knew if I got him going it would come across in his vocal performance. Seemed to me the more irritated he got the more his style came through. I also listened to all the popular bass players of the era and some of the not so popular ones. There were quite a lot of them that played great bass, without any kind of notoriety, and who even to this day remain pretty much nameless. Of course there were also the bassists that stood outÂ in the crowd that were great players and great showmen for example, John “The Ox” Entwhistle, John Paul Jones, Geddy Lee, and Chris Squire. These greats took bass playing to a whole other level in the ’60s and early ’70s. Nobody can take anything away from Sir Paul either, a great all around musician and song writer. So I had all these styles banging around in my head, plus I was developing a fondness for disco, but I never would tell Pete or Richie that. Tommy probably knew that, though, because he was always listening to other extra-terrestrial music, too. Donna Summer anyone? Also my thirst for studying music theory continues to this day, and I buy any new book I can find on the subject. Anybody up for a banging discussion onÂ the Greek Modes over a couple of Silver Bullets?