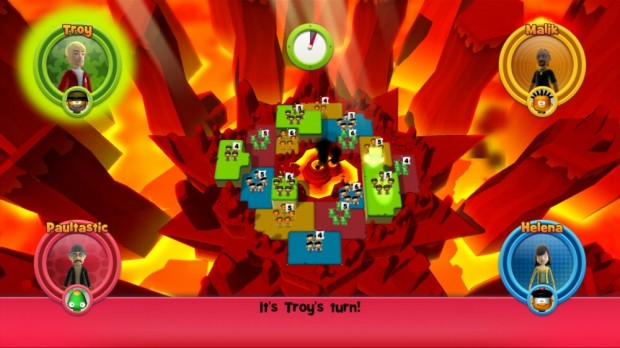 The games that get talked about are the ones that break new ground and stand apart from everything else out there. And youâ€™ll play those games deep into the night for a while until you trade them in to get the new hotness. But there are some guilty pleasure games that some of us go back to again, in the middle of the night, the virtual equivalent of standing outside the refrigerator eating a pint of Ben & Jerryâ€™s with a spoon wearing only skivvies. Those games are dependable for a few rounds (or a few hundred rounds) with friends or with an NPC, and thereâ€™s usually not much too them. But sometimes thereâ€™s a gem among the heaps that is not just a guilty pleasure, but a truly great game as well.

Quarrel is a cute but challenging word game from Scottish â€œdigital toy factoryâ€ Denki that recently made the jump from iOS devices to the Xbox Live Arcade. In a time where more people have â€œWords with Friends” invites on their phones than they do contacts, it is refreshing to see XBL get a title with the same general goal as something thatâ€™s currently popular, but presented in a format that isnâ€™t stale. Take the best parts of a few old-school board games, set it to an uplifting and vaguely Latin soundtrack, give it some neat cartoonish graphics and youâ€™ve got Quarrel.

Best described as Risk having its way with Scrabble as she keeps checking the clock, Quarrel sets you on one of twelve islands where youâ€™re given an equal share of land and troopsâ€¦ and then itâ€™s up to you to take over with your nerdy, wordy prowess. The amount of troops in your squad determines your word length, but the key is to rack up points with letter values. Some neat aspects of game play include taking prisoners if you beat your opponent while youâ€™re shorthanded, bonus troops for winning streaks when using the same squad to conquer territory, and the ticker at the bottom of the screen that defines words you and your opponent have made (as well as indicates parts of speech and the anagrams both words combined would create).

One frustrating element of Quarrel is that you can get massacred before the first turn is over. Turns do not end until you lose a quarrel and you cannot redistribute more troops, or you choose to end the turn yourself. If your opponent goes first and gets lucky, youâ€™re done for. If your opponent goes first and youâ€™re stuck with only two troops, a difficult string of letters can leave you like Poland in the early 40s. On the other hand, when you are consistently getting great letters â€¦ you can decimate your opponent the same way. Is it fair? Yes. Can it get frustrating if youâ€™re losing? Oh hell yes. Fall victim to a concession (automatic if you submit three invalid words), itâ€™s even more disheartening, as sometimes real words are not recognized in the game, and some bizarre sounding slang is totally acceptable. This seems to be more of an issue with multiplayer, as it censors words deemed inappropriate in â€œone or more countriesâ€.

The Tutorial is hellishly boring. It does not allow you to make your own words and is completely unnecessary. Playing through a few quick matches is infinitely more useful unless this is your first word rodeo. Domination is exactly what it sounds like, during which you advance by taking over entire islands. Showdown sets you head to head with the characters, all of which have different strengths and styles. The challenges section invites you to capture multiple territories in a row, win â€˜colossal conflictsâ€™ and capture a certain number of prisoners. It should be noted that you can not achieve Gold Standard if you use the backups you earn with winning streaks. Multiplayer has the same feel, and thereâ€™s no real added benefit to playing an actual person save that when you start screaming â€œWhat do you mean â€œpenisâ€ is unacceptable?!â€, someone else will hear you. And laugh.

Quarrel has clean, cute graphics and on-screen text. Your squads are made up of one group. I got kilt-wearing Scottish men. Iâ€™ve seen Vikings and ninjas as well. When you get beaten, your troops gain wings and fly off screen into a wordy afterlife. When you win, messages like â€œAbsolute Power!â€ and â€œDivine Rule!â€ pop up on screen. Itâ€™s colorful and entirely text-driven. The characters do not speak actual words, just gibberish tones. You can tell a lot of the budget was put into the look and feel, as the game development wasnâ€™t exactly something that needed excessive work.

Thereâ€™s a Yoshiâ€™s Island feel to the whole look, and the Latin-tinged musical score reminds your reviewer of the sausage-making music from Seinfeld, and put all together, it forms an unexpected attachment to the game. Maybe itâ€™s the elements of older games, maybe itâ€™s the fun and funky design. Whatever it is, itâ€™s a really aesthetically appealing, addicting game that brings out the secret imperialist in you.