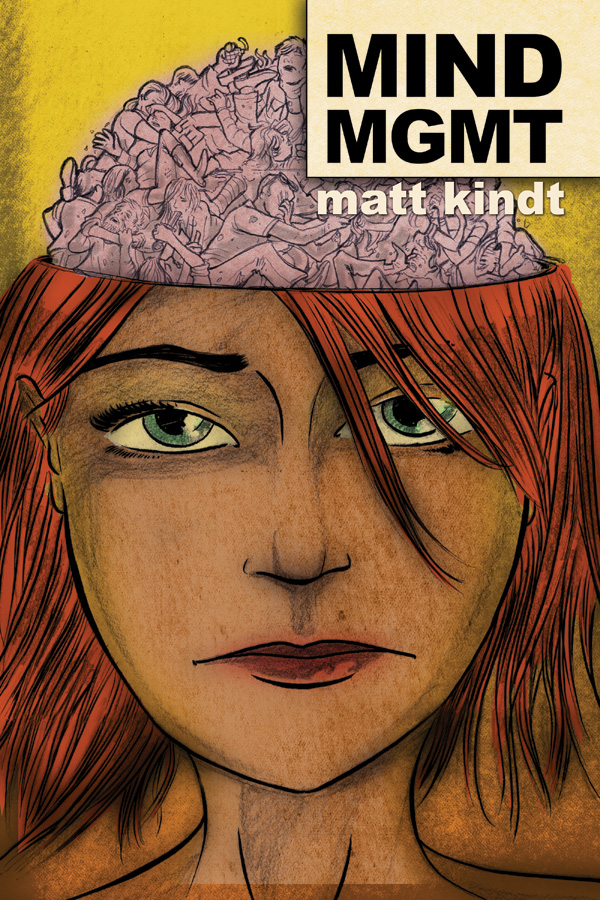 Review Fix chats with â€œMind MGMTâ€ creator Matt Kindt about his upcoming Dark Horse series and what fans of his work should expect.

Review Fix: Mind MGMT has such an interesting concept; how did it all come about?

Matt Kindt: I was reading/proof-reading a novel that a friend of mine wrote â€“ a crazy novel about a super spy who may really be a super spy, or he may be just crazy â€“ but my friend was kind of riffing on my Super Spy book (I think) and it’s just chock-full of all this crazy conspiracy stuff. But he has one throw-away line in the book about how this â€œsuper spyâ€ took a bunch of training classes to become who he was â€“ and one of the classes he had was â€œMind Management.â€ Anyway, this is probably a 600-plus page novel and he just dropped that in there. That’s it. So I asked him later about it and he didn’t even remember writing it. It was the funniest part of the book to me. Anyway, I asked him if I could have it, and he agreed. So that was it.

I then worked on creating a world/universe around MIND MGMT as the title of the comic. Usually the title of my book or project is the last thing I come up with â€“ or I have a working title that ends up just growing on me. This is the first time I got a title and the idea sprung from that. It really was that simple. But I think that title just struck a chord in me â€“ I’ve always been fascinated with spies and espionage and unexplained phenomenon and conspiracies and this just seemed like the project that would let me roll all of that together into one crazy package.

I love the idea that the government really tried to develop psychics and â€œremote imagingâ€ and all these crazy kinds of paranormal type espionage techniques. So I just took that stuff, made it real, and pushed it as far as I could. What is the world like when there are people that can make you forget something ever happened? What if you pushed the idea of â€œmind over matterâ€ or â€œmind over your bodyâ€ to create agents that couldn’t be hurt or killed. They can just use their mind to heal their bodies? I just started getting this flood of ideas. I have a guy that can see the future…but he’s not really seeing the future â€“ he’s reading the minds of every living thing around him within a 5 mile radius and then taking all of those thought, mashing them together and seeing what will likely happen based on the intent of those around him.

And then what are these people like? And what is their training like? And how does the government implement these agents in real-world situations? You can end up having one agent go in, and pacify an entire city before the Marines roll in and then you would have this war without a shot being fired.

Review Fix: What’s your favorite element of the first issue?

Kindt: I think what I’m most excited about is that I feel like I’ve made a comic book that HAS to be a comic book. It’s designed in a way that is unique to the medium. From the inside cover that has a MIND MGMT historical story, to the letters page at the end and even the advertisement on the back cover that isn’t really an advertisement. I’m trying to make each issue of this series a kind of art object in a way. Something that appears to be a comic book on the surface, but when you’re done reading it, you realize it really is something else all together. The back ad on issue 1 isn’t really an ad â€“ so you’ve got to look closely at it. There’s a hidden code on the back that, when combined with issues 2-6, will form a secret message that will lead you to some â€œbonusâ€ content outside of the comic. So I guess, other than the main storyline â€“ if I had to pick one element â€“ it’d be that ad on the back!

Review Fix: What are your long-term goals for the series?

Kindt: I have the series planned out for three years. So ideally at the end of issue 36 you will have gotten every last detail on MIND MGMT â€“ past and present. You’ll get to meet all of the agents and get their stories…and hopefully it will stand out as a comic book series that did something different â€“ something unique to its format and medium. I really have no interest in just doing a monthly comic for the sake of doing a monthly comic. There has to be a reason for it. I’m one of those guys who â€œwaits for the trade.â€ I haven’t bought a monthly comic â€œfloppyâ€ for years. But I remember loving to do that. Looking forward to each week at the comic shop. So I set out to make a monthly comic that isn’t only worth waiting for each month â€“ it’s essential that you pick up the monthly issues to get everything.

Review Fix: How important is the art in the story telling?

Kindt: It’s definitely equal to the writing. And in a superficial way it is more important than the writing. I know that if a potential reader is turned off by the art, then it’s a lot harder to get them to actual read the book. So that’s the balance you have to strike, I think as a writer/artist/cartoonist. I could noodle away on my comics for years and cram them with hyper-realistic detail â€“ but the thing is, I think you also lose something in a more illustrated style like that. There has to be a balance. If you fill every inch of a panel, it ends up slowing the reader down. I think the art is a lot like language â€“ you don’t want it to be so flowery that you’re struggling to understand the message. It’s got to flow and tell the story and move the pace along. So I’ve pushed and pulled my style over the years to try to find that balance â€“ just enough style and detail to pull the reader in but not so much that in begins to slow down the story.

Review Fix: Who do you think will get the most out of the series?

Kindt: Careful readers. This book is designed so you can probably sit down and read the main story in a half hour. But if you do that you’re definitely going to miss a lot of what’s going on. There’s something embedded in every page of this book. Running along side main story is some subtle text that if you go back and read it, ties into the main story but also acts as the â€œField Guide for MIND MGMT agents.â€

In addition to that, there’s the ads that are hiding some things as well as a few other tricks that I’ll won’t talk about â€“ unless no one uncovers them!

Review Fix: How do you think it stacks up with your other work?

Kindt: Well, I’d like to think that everything I do is improving on the thing I’d done before. But this is actually different â€“ I really haven’t done a standard monthly kind of book ever. I’ve come from a place where I just started doing graphic novels from the beginning so when I approached doing a monthly book I approached it from that perspective. Each issue is like a miniature graphic novel in a way. So while I don’t know if that makes it â€œbetterâ€ than the things I’ve done in the past, I do feel like this series is the most ambitious project I’ve ever done.

Review Fix: How do you think this series will be remembered a year from now?

Kindt: Hopefully as a series that’s still on-going! But also a series that can make the format of â€œmonthly comicsâ€ make sense again. The series that got readers back into a store to pick up a monthly floppy book.

And I get why readers are drifting away from that â€“ I don’t want to pay $4 for a comic that takes me 5 minutes to read. I want something that I keep out on the coffee table or by the breakfast cereal and think about it for 30 days until the next issue comes out â€“ and keep looking at it because I’m sure I missed some extra hidden thing in there. That’s what I’m hoping this book becomes to readers.