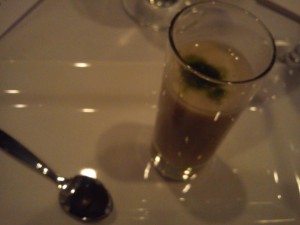 Some of us take for granted the small joys of gathering around a table for a holiday; the warm scent of baking bread; or even sticky sweet ice pops dripping down kids hands on a summer day. Food is best as an experience, and shouldn’t be those five minutes you use to wolf down a knish in between classes or that lonely bowl of cereal while watching Conan. The love, not just the flavor, being put into food is something that often gets lost nowadays. When I started watching Top Chef: Texas this past season, I came down with the cooking bug and fastened my apron strings. I brought some love back into the kitchen. It did make me wonder how much love is in that food I drool over every week. How much “experience” do the judges really get out of eating plate after plate of food? I was so curious as to what it really tasted like.

I happen to live in rural Wisconsin, where my favorite current potential Top Chef Grayson Schmitz hails from. When I found out that she was guest chef at Sweet Basil in nearby Plymouth on Jan. 30, I called to make reservations right away. Living in a small town, I don’t think I’ll be getting many chances to do something similar in the near future. I will say that fancy dining is not exactly my element and I was indeed worried that I’d end up driving to McDonald’s afterwards. 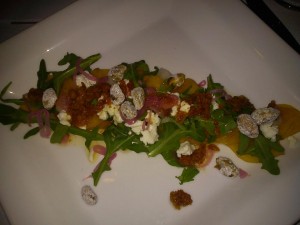 Arriving at Sweet Basil earlier than intended, we gathered in the bar with other hungry fans. We were seated with two other couples, and hearty chunks of freshly baked focaccia and olive oil were served. As an Italian, I greatly appreciated this. Soon after, we received an “amuse bouche”, or a bite sized hors d’oeuvre. Chef Grayson announced it was “interactive” â€¦ in that the spiced gelee was on a demitasse spoon, and it was our job to stir it into the shot glass of parsnip soup with micro chives, to marry all the flavors together. The soup was creamy and full-bodied, like a peppery, mild tomato (without the acidity and heaviness I associated with tomato soup). It was paired with Cloudy Bay Sauvignon Blanc, whose notes of lemon, white peach, tangerine, passion fruit, melon and green tea went completely lost on me. It tasted like regular old white wine to me. 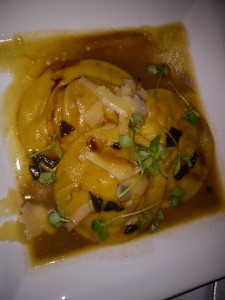 The second course was almost a disappointment. My favorite fruit are plums, and it was billed as a grilled plum salad. As Chef Grayson indicated, it was hard to find good plums during this season in Wisconsin, so she opted for persimmons and asian pears. Having never had a persimmon, I did not know what to expect. Served with LaClare Farms Chevre, (made in my current town, Chilton) candied pistachios, pickled shallots, and a warm bacon vinaigrette, this crunchy and light salad was good enough to get my anti-fruit boyfriend to eat an entire plate of salad. The persimmons were sliced thinly, and had a dry melon consistency. Paired with the goat cheese and pistachios, it gave a delightful crunch with a hint of sweetness. The arugula helped round out the course with some bitterness and the faint saltiness of the bacon vinaigrette really gave everything in this dish a nice kick. Can you really go wrong with bacon? The Cambria Chardonnay it was paired with was unremarkable. The alcohol was much more pronounced than the first course had been. I must not like white wine. 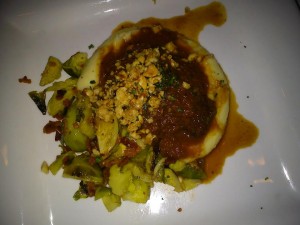 Everyone’s favorite course was no doubt the handmade butternut squash ravioli. Served with brown butter, sage, shaved parmesan, a drizzle of aged balsamic and some micro basil, I must have heard three different tables wondering aloud if there were extra to go around. Chef Grayson and her sister Olivia spent hours hand preparing over 400 raviolisâ€¦ and it was not in vain. They were divine. The creamy and light flavor of the butternut squash complemented the brown butter and balsamic, giving it a much more mature distinction from your average plate of raviolis with sauce. All other raviolis may now seem like Chef Boyardee after eating Grayson’s handmade pasta. She is quite right to pride herself on it. Its pairing, A to Z Pinot Noir, I though was the best complement to any of the dishes. It balanced very well on my palate and did not cut the richness of the plate. Rather, it seemed to be a continuation, like it was made for the dish.

I will admit I was scared to try the main course. I knew in advance that we would be served veal, which I was already coming to terms with for the week before the dinner. When we were seated and I spotted “veal cheeks” on the menu, my heart sunk. Cheeks? Seriously? Cheeks?? I was assured by one of my dinner compatriots that the cheeks of any animal are the best cut of meat. I refused to believe him. The glass of Chateau Ste. Michelle Ethos Cabernet Sauvignon was poured, and I indicated that I’d need a whole glass if I were going to eat veal cheeks. The braised cheeks, topped with brasato sauce, gremolata and toasted hazelnuts, served with roasted brussel sprouts and a potato puree, were actually not half bad. I will say I’d never cook them myself, but they tasted like roast beef. They practically melted in your mouth because they were so tender, and the brasato sauce was really rich and flavorful. Having never eaten brussel sprouts before, I wasn’t sure what to expect, but they were actually really good. They reminded me of little cabbages. And the potato puree was a nice complement although, it’s mashed potatoes. It’s hard to go wrong there. The wine choice overpowered the meal. My eyes nearly teared up as I finished it. 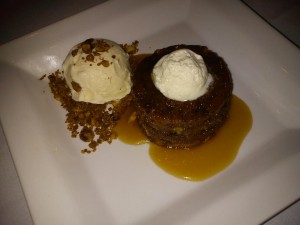 As dessert was served, I knew enduring veal cheeks was worth it. Chef Grayson served a sticky toffee cake with a salted caramel sauce and sour cream ice cream. It was paired with Terre D’oro Zinfandel Port, which was sweeter than any of the other wines we had sampled, but still a bit too biting for my tongue. The cake was decadent. It was moist and sweet, and the salted caramel brought out almost fruity notes in the cake. It wasn’t dense like a brownie, but it was more so than your average cake. The sour cream ice cream (which did NOT taste like sour cream) was luscious and mild. Taking a bit of the ice cream and cake in one scoop was like having the most adult brownie a la mode I’ve ever had.

Chef Grayson Schmitz was able to pull off more than a financially successful dinner at Sweet Basil tonight. She clearly put a lot of love into her food, and everyone in attendance tonight was able to experience it on multiple sensory levels. The intermingling scents of the food, the attractiveness of her plating, the textures of the food, hearing her describe each courseâ€¦ and of course tasting it afterward, made for a fun, appealing evening. We did not stop at McDonald’s on the way home.

Too Much Mash In Their Musical Potatoes

Infantreeâ€™s full-length debut CD â€œWould Workâ€ is an album thatâ€™s full of surprises. Composed and recorded by a Los Angeles-based...