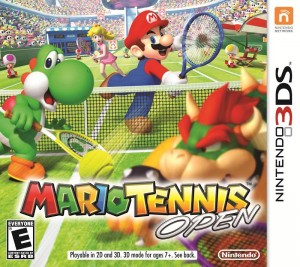 Nintendo has revealed more details Â for the upcomingÂ Mario Tennis Open, which launches for the portableÂ Nintendo 3DSÂ system on May 20.

The Special Games mode inÂ Mario Tennis OpenÂ lets players hone their tennis skills while enjoying tennis games with a Mario twist. Players can check out games such asÂ Super Mario Tennis, which puts a classicÂ Super Mario Bros. twist on tennis drilling. As they play through familiar game levels, they can use their tennis swing to stomp Goombas and Koopas along the way.

People can play as their favorite characters from the Mushroom Kingdom or even compete as their Mii characters. They can also customize their Mii characters with Mushroom Kingdom-themed tennis gear, which not only enhances players’ appearances but also can boost their stats. The wide selection of available gear includes Bowser’s favorite racket, a Bullet Bill outfit and Peach’s tennis shoes.

In addition to a singles tennis match mode, another mode in the game lets up to four players compete online in multiplayer doubles matches. Players can also compete online for leaderboard standings in Open Match.

When playing with other Nintendo 3DS owners in the same room* or against distant competitors using a wireless broadband Internet connection, players can cooperate to take on a common opponent or stay competitive and try to claim the glory for themselves. Players can opt to use intuitive touch-screen controls or increase their strategic options with traditional button controls. They can also switch seamlessly to the Nintendo 3DS system’s built-in motion controls.