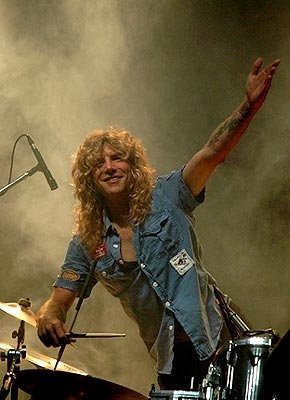 The fourth annual REVOLVER GOLDEN GODS AWARD SHOW presented by EpiphoneÂ® will take place Wednesday, April 11, at Club Nokia in Downtown Los Angeles. For the first time ever, the event will be broadcast live in its entirety on Xbox LIVE, as well as on the Xbox and Revolver Facebook pages.

The 2012 REVOLVER GOLDEN GODS AWARDS SHOW will feature one-of-a-kind special performances and collaborations that honor both the past, present and future of heavy music. The nightâ€™s hard-rocking musical performances will include sets by MARILYN MANSON (in his first U.S. performance in nearly three years); iconic GRAMMY-winning guitarist SLASH featuring Myles Kennedy and The Conspirators; EVANESCENCE; SIXX:A.M. featuring Nikki Sixx of MÃ–TLEY CRÃœE, James Michael, acclaimed rock producer and songwriter, and DJ Ashba of GUNS Nâ€™ ROSES (in their first performance in almost four years); and 2011 Best New Band Golden God Award winner BLACK VEIL BRIDES, who will perform their only U.S. show of 2012 so far.

Adler, McKagan, Slash, singer Axl Rose and guitarist Izzy Stradlin will all be inducted into the Rock And Roll Hall Of Fame next month in Cleveland, along with later GUNS N’ ROSES members, keyboardist Dizzy Reed and drummer Matt Sorum.

Steven Adlerâ€™s new band, simply called ADLER, will be releasing their debut single â€œThe One That You Hatedâ€ April 10th on iTunes.