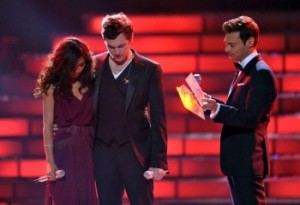 While Wednesday nightâ€™s American Idol season 11 finale generated the highest grossing number of votes for the show and winner Phillip Phillips, it also totaled the lowest ratings in the showâ€™s finale history.

Season 11 finaleâ€™s ratings were half of what they were during the 2003 season when Ruben Studdard and Clay Aiken battled it out in front of 38 million viewersâ€”the most watched Idol finale everâ€”and 27 percent decline from the 29.3 million who saw Scotty McCreery take home the title last year.

Idol still beat the finale ratings for such up-and-coming rivals as The Voice (11.93 million viewers) and X Factor (12.59 million viewers). Also, the ratings decline was expected, since season 10 received a small boost due to the addition of judges Jennifer Lopez and Steven Tyler.

According to reports, the steep Idol fall was among viewers 18-49, the most sought-after demographic among networks.