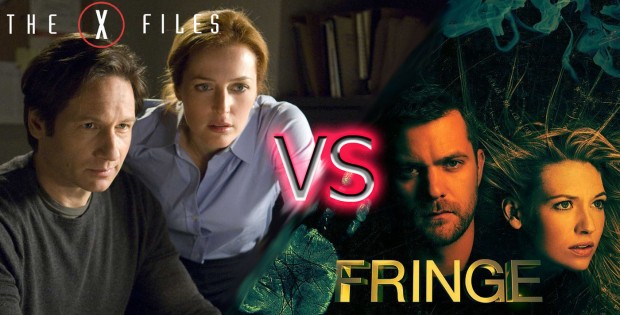 So with the current season wrapping up, and the joyous news that itâ€™s been renewed for a fifth and final season, now is the time to answer the question thatâ€™s always been there about Fringe. How does J.J. Abramsâ€™ sci-fi drama compare to its conceptual predecessor, Chris Carterâ€™s The X-Files? Did it improve on the original, or does the old dog stand the test of time? To find out, Review Fix will conduct a completely and utterly unscientific comparison, to finally settle who reigns supreme. Let the smackdown begin.

The conspiracy theorist style of the The X-Files was both a boon and a burden to the show. It naturally lent itself to great drama, created a clear division between good and evil, and established noble, self-sacrificing characters. However, much like conspiracy theories themselves, the plot ended up with too many holes, too many loose ends, and too much reliance on the idea that either the shadow government, or the powers of the paranormal, could pull off just about any feat. The semi-exodus of Mulder in the last few seasons only exacerbated these problems, making the show feel like it was treading water.

Fringeâ€™s plot, with its pseudo-hard science foundation, canâ€™t rely on such convenientÂ  deus ex machina devices. It also kept it much more grounded. The mysteries were there, but they were leading to something concrete and real. It made the notion of evil clone soldiers from an alternate universe more believable than a government conspiracy to cover up an alien invasion. Fringe also kept to the main plotline more often, whereas The X-Files would only have a handful of such episodes a season.

Unlike the typical crime drama, The X-Filesâ€™ truly dramatic moments didnâ€™t revolve around shootouts, or rushing to stop a bomb from going off. The bread and butter of the show was the conflicts between characters: Mulder and Scully over empiricism versus the paranormal, Mulder and Skinner over whatâ€™s right versus whatâ€™s allowed. These scenes worked because the dialog was so well crafted. The ending monologue used in many episodes also elevated the show, and reinforced the theme of the lone agent against the system.

Fringeâ€™s writing largely lacks that spark. With the exception of Walter Bishopâ€™s lines, which are always entertaining, thereâ€™s a sense that the writers are going through the motions most of the time. In particular, they rely too much on the trope of nearly every week, another doomsday device has shown up that will most definitely destroy the world if they donâ€™t stop it. Thatâ€™s fine once in a while, but when itâ€™s all the time, it loses its edge.

Mulder and Scully may be iconic characters at this point, but in retrospect theyâ€™re overrated. Mulder was great as a pariah and true believer, but in the more personal moments he came off as smug and arrogant, like the kid in school who decides because he isnâ€™t popular, heâ€™s going to be a condescending jerk to everyone. And Scully, she was just plain dull. It took some pretty extreme scenarios for her to project anything other than mild concern. Peter and Olivia on Fringe, by contrast, have a better chemistry. Their romance felt like it came together naturally, and not forced like the awkward romance between Scully and Mulder. Plus, weâ€™ve got to count the years when the T-1000 took Mulderâ€™s spot, and he didnâ€™t have chemistry with anyone on the show, romantic or not.

However, what The X-Files lacked in the main characters, they made up for in the secondary ones. The Cigarette Smoking Man was the pure embodiment of bureaucratic evil, a nefarious cancer upon the government that represented everything we hate when the political and private powers meet. He was a character you personally loathed. Krycek was excellent as the catalyst to shift the plot, and his opportunistic nature left you unsure if you should root for or against him. And the Lone Gunmen were such fan favorites, they spawned a spinoff. No secondary character on Fringe is going to do that. The only serious villain theyâ€™ve had to contend with, Robert Jones, came off more like an upscale European furniture designer than a criminal mastermind.

Both series did an excellent job of tapping into the political climate of their respective eras. The X-Files premiered shortly after the fall of the Soviet Union, when Americansâ€™ fears about what the Reds were doing mutated into a fear of the Clinton-era government. Militia movements were popping up all over, and conspiracy theories spread across the political spectrum: the Clintons were having people assassinated, the military was covering up something with the post-traumatic stressed disorder of Gulf War vets, all sorts of New World Order allegations. The X-Files found creative ground with this newfound paranoia and individualism, making it symbolic of the times.

While The X-Files ended under the Bush Administration, when Americans went from being threatened by an omnipresent state security system to be comforted by it, Fringe began during the waning days of Bushâ€™s second term. In contrast to The X-Files, the government was presented as constantly behind the curve, just as in the dark about the mysteries and conspiracies of the world as anyone else. This reflected on the reality of the War on Terror: an enemy that couldnâ€™t be neatly categorized and defined, one that when seemed defeated, would just create new problems and questions. It was also a time when the government had less-than-stellar performances in Iraq, Afghanistan, and New Orleans, and the country was realizing that our leaders didnâ€™t have all the answers.

Fringe, however, has never reached the mainstream popularity of The X-Files. While sci-fi and J.J. Abrams fans have followed it devoutly, Fringe is unlikely to have two spinoffs, two movie adaptations, and will end at five seasons to The X-Filesâ€™ nine. Plus, The X-Files established that Fox could make a serious, respectable drama, and not just comedies and COPS.

Fringe has the same problem here than any high fantasy novel has when compared to Lord of the Rings. You can make an argument that it has improved on the original, that the writing is better or the characters more developed, but it is always going to lose the legacy question because itâ€™s derivative. Fringe may inspire future shows or movies, but those works will always be traceable back to The X-Files.

The two series tied up in the creative categories, and Fringe deserves a lot of credit for taking the scientific route over the â€œAnything Goesâ€ nature of The X-Files. But The X-Files dominated the cultural impact categories, emerging as the clear overall victor. Fringe may be good, but years from now weâ€™ll still be saying, â€œI Want To Believe.â€