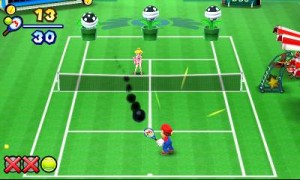 Following last month’s unveiling of the Special Games mode in Mario Tennis Open, Nintendo has revealed even more details about the upcoming game, which launches for the portable Nintendo 3DS system on May 20. In addition to the variety of fun tennis games with a Mario twist in Special Games mode, fans will be able to connect with friends for online matches, enjoy new StreetPass features and unlock bonus game characters through game play and special QR Codes.

* Online Play: Mario Tennis Open players can compete and cooperate in local wireless matches with other opponents and play exhilarating games. Players can also build up their Open Match standings, check the monthly leaderboard and win Victory Medals from every challenger they defeat.

* Ink Showdown: In this fast-paced competition, Piranha Plants spit ink balls from the back edge of the court. Players must destroy the ink balls before they splatter, while hitting tennis balls away from an opponent.

* StreetPass Features: Players can inspire friendly competition by using the Nintendo 3DS system’s StreetPass feature. They can engage in competitive StreetPass Matches or cooperative Ring Shot challenges with computer-controlled versions of people they encounter and share their StreetPass winning streak. StreetPass can also be used to show off players’ Mii characters, which can be customized with new outfits and accessories that can improve their on-court performance. As users play, new items for their Mii will be unlocked in the Item Shop.

* Unlockable Characters: New and familiar Nintendo characters can be unlocked – some through game play, others via special QR Codes. Unlockable characters include Luma, Baby Mario and Dry Bowser.