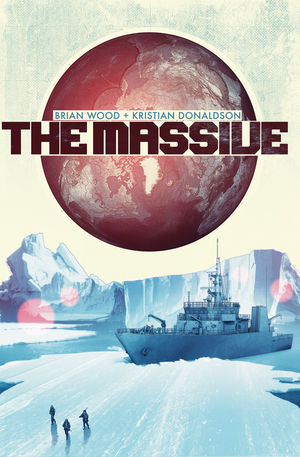 Is it possible for an oil rig to change the lives of so many people? According to â€œThe Massiveâ€ it apparently can.

â€œThe Massiveâ€, written by Brian Wood and art by Kristian Donaldson, is an introduction to three characters and their stories. The characters are: Callum Israel, a special ops from Bangladesh sent to resolve a situation on the rig, Mag Nagendra, a Sri Lankan boy caught in the middle of a tough cultural shift when his small island village goes from being a fishing village to industrial and Mary, itâ€™s not clear what her role in the story is yet.

For an introductory comic, itâ€™s not very effective. The story doesnâ€™t give the audience any reason to care about any of these characters little less care about the plight of the world theyâ€™re in. Itâ€™s also very heavy on the political awareness of the environmental and societal effects of pollution. That may be the whole theme of the comic, but it is so pushed in your face that it seems like youâ€™re reading a pamphlet written by the EPA than a comic written for entertainment.

On the other hand, Donaldsonâ€™s artwork is very good and the only redeeming quality of the comic. The amount of skill put into the art makes it seem like it belongs in an animated film made by Disney. The character models are smooth, lively and life-like. Even the landscapes and colors show off the artistâ€™s skill. The underwater scene is one of the better done scenes.

â€œThe Massiveâ€ may have eye-catching art, but the story itself fails in all accounts. From characters that are not interesting from the get go and a story that feels like an EPA pamphlet this is one introductory comic that fails at its job. There really is no incentive to continue with this comic unless you want to see more of Donaldsonâ€™s art and you are really curious to see where Wood is trying to go with this story. Other than that, just watch â€œCaptain Planet and the Planeteers.â€