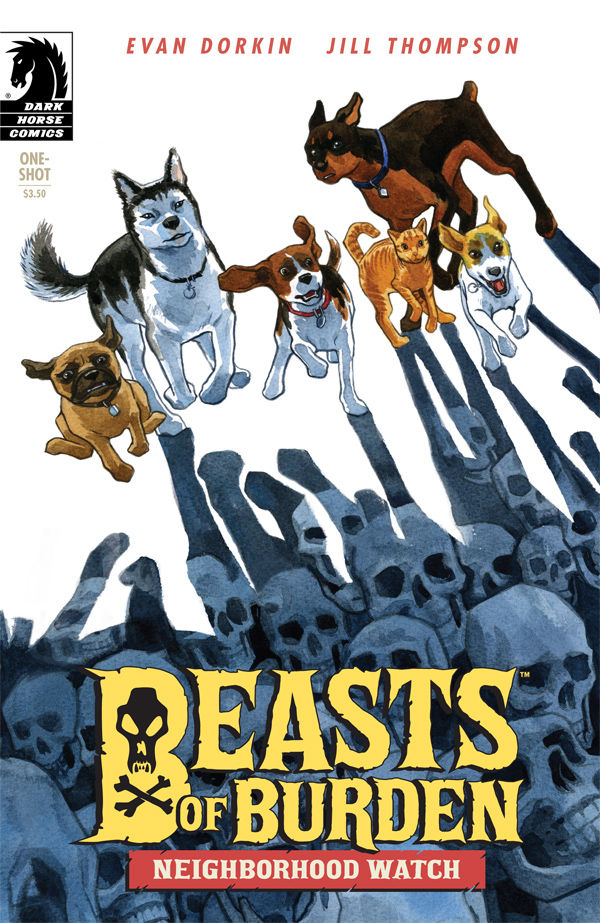 Say what you want about paranormal investigators, these are pretty brave people. Now, what if these same investigators were not humans, but a bunch of dogs? Thatâ€™s what Evan Dorkin set out to write with the one-shot â€œBeasts of Burden: Neighborhood Watchâ€ with art by Jill Thompson.

â€œBeasts of Burden: Neighborhood Watchâ€ is three stories about a group of dogs and a cat who are paranormal investigators. It may sound like a silly idea, but the execution works and is a good read as childrenâ€™s stories.

The first story, â€œFood Run,” is about a goblin trying to steal chickens in a chicken coup and Rex and the cat Orphan chase after it. Yes, itâ€™s just one big chase scene, but itâ€™s an exciting oe with a good payoff at the end and a perfect introduction to the world.

â€œStory Timeâ€ is where a sheepdog tells the story of a legendary dog named Bitan and how he fought against the basilisk to a group of pups. The story is like one of those classical myths that explain how certain things came to be and that these things were once living beings. Itâ€™s a well-written story and is the best of the three.

Things take a scary turn with â€œThe View from the Hill.â€ The gang meets a flock of sheep that tells them that they died in a fire and they are perfectly content flocking in that area and not telling their dog who tried saving them. The story may be some kind of allegory for death but itâ€™s just too simple even by childrenâ€™s standards. The image at the end will give some children nightmares for a while.

The art is, if anything, quite beautiful and looks like it belongs among the best childrenâ€™s novels ever written. The colors are soft, easy to look at and everything blends well together. The character designs are cute but not cheap, cartoony or cringe worthy. They all have a certain charm to them that makes them likeable even with the short time the reader has with them.

â€œBeasts of Burden: Neighborhood Watchâ€ is a nice little one-shot with an excellent concept, a fun story and fine art. Itâ€™s even an excellent beginner comic for the little ones even with that one scary image at the end. If you can get past the whole animals being paranormal investigators, then thisâ€™ll be a delight for you.