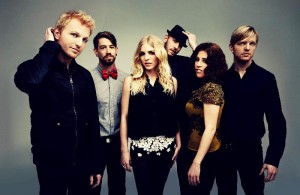 Delta RaeÂ are proud to announce that they’ve been selected to perform at the Democratic National Convention in Charlotte, North Carolina on Thursday, September 6th. Calling it a “tribute to the dynamic convention host state,” the Democratic National Convention Committee (DNCC) announced that the band will join the lineup of fellow North Carolina artist, James Taylor for festivities that will precede President Obama’s nomination acceptance speech at the Bank of America Stadium.

“Highlighting such amazing talent from North Carolina as part of the entertainment at the convention’s closing event is just one way that convention organizers are working to bring the flavor of North Carolina to all Americans,” said DNCC CEO, Steve Kerrigan. “Whether you’re one of the tens of thousands who received community credentials to attend this historic event in person, or tuning in remotely, you will have a taste of the wonderful region that is home to this year’s convention.”

“Watching Barack Obama win election to the presidency in 2008 was one of the most exciting and affirming moments of my life as an American. I am so thrilled to think what he can accomplish in a second term and I couldn’t be more proud or humbled that Delta Rae’s music will be a part of ushering in that great hope” remarks Delta Rae’s IanÂ HÃ¶lljes. “We seem to be at a tipping point for so many important movements” continuesÂ HÃ¶lljes. “Marriage equality, women’s rights, and the protection of the middle class, among them — and I believe President Obama’s continued leadership is essential to landing on the right side of history on these issues.”

Ian’s brother and fellow Delta Rae band member EricÂ HÃ¶lljes adds, “there are currently so many issues being discussed and decisions being made in Washington that are going to drastically affect me and my generation. I truly hope, as young people, we stand up in this election and let our collective voice be heard.”

Several years ago, California voters passed Prop 8, which effectively banned gay marriage in the State. In response, Delta Rae’s IanÂ HÃ¶lljesÂ wrote song “Chain on Love,” protesting what he believed Prop 8 to be — a severely unjust law that directly discriminated against the LGBT community and, by doing so, infringed on the rights of all Americans. Â Â In May, North Carolina voters faced a similar choice with Amendment One. Delta Rae fervently supports marriage equality and, more generally, the equal rights of the entire LGBT community.

Delta Rae were signed to Warner Bros. Records by legendary A&R man Seymour Stein who is responsible for Madonna, Talking Heads and The Ramones among others. They’re a six member band, with three siblings and four lead singers. The band’s genre-bending sound is rooted in four-part harmonies and they’ve created their own Southern influenced version of Americana-tinged pop music deep in passion, heart and soul. You need to see them live to fully understand what this is all about. Come out to a show! Delta Rae will be on the road the rest of the summer and fall including stops in Nashville, TN 09/12 for Americana Festival and in Los Angeles 09/22 at El Rey Theatre. A full list of dates is below.