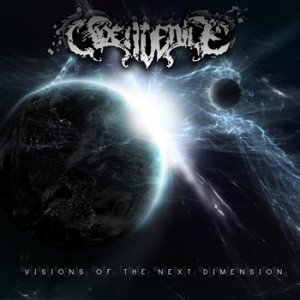 Local extreme metal giants â€œOpen Denileâ€ have released their aptly titled first full length album â€œVisions of the Next Dimension.â€ The New York band have been around several years and have played around the streets of New York and New Jersey for some time, exposing audiences to their interesting breed of progressive technical death metal.

For starters, every member in this band is a talented musician. They have all taken their love for metal to new heights to create a diverse sound with influences ranging from Cannibal Corpse and Death to Type O Negative and Dream Theater with hints of Symphonic Black Metal thrown into the mix.

Some of the most interesting numbers include â€œPathogen Eradication,â€ â€œPerishâ€ and â€œBlessed.â€ The latter of which features amazing harmony between keys and guitar. Keyboardist/Vocalist Stephen Kain wails around the second half of the song, making this one of the most memorable songs on the album.

Another fantastic song is the instrumental â€œAn Absolute Memory.â€ The arrangement of the song makes it feel like you’re reflecting all life decisions. The guitars really capture the moment.

The rhythm section of the album flows very nicely. Bill Angelini is a fantastic drummer. He captures the grooves of the songs and locks them in nicely. There is so much power and emotion in his style. His double kicks around the end of â€œVivid Degradationâ€ are monstrous. Angelini also doubled up on bass and rhythm guitar for â€œAn Absolute Memory,â€ putting very neat and tight riffs to compliment his drumming. Guitarist Chris Cedeno is a crushing rhythm guitarist. He puts a really great touch on the songs â€œPathogen Eradicationâ€ and the closer â€œImmortalized.â€ His tone really adds depth to Open Denile’s sound.

Lead guitarist Craig Storer is impeccable. Not only is his playing fantastic but his clean vocals are astounding. There is a lot of talent in this man. Storer also doubled up on bass for the songs â€œImmortalizedâ€ and â€œVivid.â€

There were a few guests included on the album as well. Tom Tulotta played bass on the songs â€œPathogen Eradication,â€ â€œPerishâ€ and â€œBlessed.â€ Tulotta’s bass lines were a great addition to the album and they really give those songs a good push. Ron Giacalone did guest vocals on â€œPerishâ€ and Bruce Mason did guest organs on â€œBlessedâ€ and â€œAn Absolute Memory.â€ All of these guys did a wonderful job with their parts and helped add some finishing touches on their songs which featured them.

The closing track â€œImmortalizedâ€ is titled unbelievably fitting. It sums up the entire sound,goals and meaning of Open Denile â€“ while including every influence carefully orchestrated into the song. Kain’s keyboards come out of nowhere much to the listeners delight, Angelini’s drumming is outstanding and Storer and Cendeno’s playing compliment each other so well it’d be a crime to go to an alternate universe where one or the other is not on the song.

Open Denile’s self released debut â€œVisions of the Next Dimensionâ€ is like looking into the future of metal. The band shows that theyâ€™ve paid their dues and are more than ready to play with the big boys. The band is New York’s answer to Periphery and should be on a major label supporting the acts they are so heavily influenced by.

Open Denile will be performing at the Gramercy Theater in New York City on September 11, 2012. They will be supporting Death Metal Legends Obituary on their â€œCarnival of Death Tour.â€