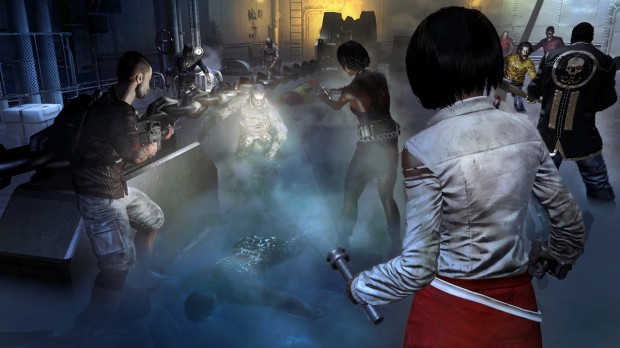 Deep Silver has revealed the first details about the next installment in the Dead Islandâ„¢ franchise, coming to stores in 2013.

Having survived the ordeals of the zombie infestation on the once beautiful island resort of Banoi, our group of survivors thought they had finally found a safe place to escape from this terrifying nightmare. But they were wrong. Shortly after the battle-hardened team had landed their helicopter on a military ship, a furious storm hits and havoc quickly spreads on board. Suddenly they find themselves struggling for their lives again with all hope drowning in the rising waves.

With invigorating new elements infused into a proven mix, Dead Island Riptide will reanimate the zombie terror in the original game. A monsoon has hit the once beautiful archipelago and heavy rainstorms have laid waste to large areas of the islands. The city of Henderson and jungle areas on the island of Palanai were flooded leaving boats as the only remaining way of transportation. Dynamic weather conditions will force the team members to adapt to changing visibility conditions.

A fifth character will join the team, with an all-new and unique skillset. The combined skills of the group will be sorely needed, since terrible, new and unknown zombie mutations have emerged all over the island.

In new hub defense missions, the coop teamwork skills of the survivors will be tested to the limit â€“ they need to strategically place traps, fences and turrets to fend off oncoming Zombie onslaughts and to protect the humans in these sanctuaries.

For more information, visit one of the following official Dead Island sites:

About Deep Silver
Deep Silver develops and publishes interactive games for all platforms, seeking to deliver top-quality products that provide immersive game experiences driven by the desires of the gaming community. The company has published more than 100 games worldwide since 2003 including the #1 best-selling zombie action thriller, Dead Islandâ„¢. Deep Silver, Inc. is a wholly-owned subsidiary of Koch Media, GmbH. For more information, please visit www.deepsilver.com.

About Techland
Techland is a leading Polish developer, publisher and distributor of PC and console games since 1991. Its proprietary Chrome Engine 5 technology is among the world’s most advanced game engines, with full X360, PC and PlayStationÂ®3 system compatibility. With a staff of nearly 200 specialists in two development offices in Wroclaw and Warsaw, Techland is committed to delivering top-quality titles for worldwide markets. Currently the company is working on several high-profile titles for consoles and PCs.