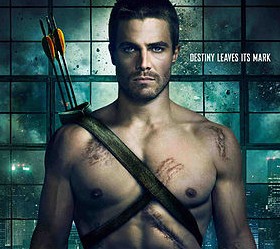 Stephen Amell is one of those guys. After his stints on â€œHeartland,â€ â€œPrivate Practiceâ€ and â€œHung,â€ you knew he was one perfect role away from â€œmaking it.â€

â€œArrowâ€ is easily one of the most exciting shows on television this fall and Amell is the reason. While the supporting cast is good-looking and well accomplished, Amell is stellar as the Green Arrow himself, Oliver Queen.

Savvy, smart and stunt-driven, â€œArrowâ€ hits all the right places, especially for fans of â€œSmallvilleâ€ that thought theyâ€™d never get another decent live-action superhero-themed sitcom.

This is what â€œThe Capeâ€ should have been, but never was.

The cinematography of â€œArrowâ€ matches the source material perfectly. Itâ€™s top self for a network TV show. The same thing goes for the stunts. The fight scenes are orchestrated in such a smooth and realistic fashion that the smile they induce doesnâ€™t wear off until the show is over. Itâ€™s like â€œRumble in the Bronxâ€ meets â€œMax Payne 3.â€ MMA fans will also notice that Queen doesnâ€™t fight like a superhero. He uses chokeholds and the ground and pound that put the UFC on the map in the United States.

While all of this is cool, nothing is more intriguing than the main character. Queen is Batman-smart, Spider-Man-sneaky and Deadpool-sweet. Even though Amell is cool and charismatic in the role, he has help in the right places too. His best bud, Tommy Merlyn, (Colin Donnell) his ex-flame, Laurel Lance (the smokinâ€™ hot and talented Katie Cassidy) andÂ Detective Quentin LanceÂ (PaulÂ Blackthorne) add a layer of depth not found on a CW show since well, â€œSmallville.â€

The plot is built in a way that it will reward those that stick with it. The twist-turn at the end will definitely keep people interested for the next few weeks, as the show begins to show more of its teeth. Director David Nutter has organized and crafted Greg Berlanti and Marc Guggenheimâ€™s story well enough that even the few maize-filled lines and clichÃ© that pop up occasionally, areÂ forgiven. Simply put, thereâ€™s more than enough fun to go around and plenty of action and story to keep you interested.

But be warned, just like â€œSmallville,â€ the show is different from the comic book that made it possible. Queenâ€™s sidekick, Speedy, will most likely be his sister, Thea (played by the equally sly and sweet Willa Holland). At the same time, the instances of wanton drug usage and reckless personalities that drove the comic through the â€˜late 70s and 80s will still be prevalent.

Talk about having your cake and eating it too.

In the end thatâ€™s exactly what â€œArrowâ€ is, as it successfully amalgamates a classic, yet-underrated comic book character and manages to make it something a fan of â€œVampire Diariesâ€ and â€œSupernaturalâ€ would dig.

Comic book fans wonâ€™t mind it too much either.

If you missed the pilot, you can watch it on the CW’s official site, here.