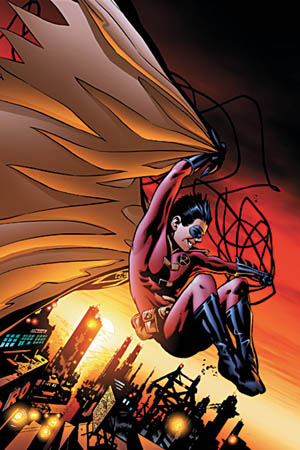 A lot of people were drawn to Tim Drake, the third Robin, because he was the surrogate fanboy character. Just like you he paid close attention to adventures of Batman & Robin. And through deductive reasoning he was able to piece together their secret identities and become a superhero.

But that wasnâ€™t his great appeal for me. It was more that he was a character bearing the burden and inheriting the strengths of an established legacy, the Robin mantle. I was drawn to those characters like Kyle Rayner, the last GL at the time and Jaime Reyes, the third Blue Beetle.

As it is Â Filipino American History Month in New York , I wonder if part of the draw was how much I didnâ€™t feel I had any heritage in the U.S. while growing up. As a first generation immigrant even my relatives here didnâ€™t seem to know the history of Filipinos in America past our own family story.

It still baffles me to think that each time I announced I wanted to be journalist, a poet, or a writer, that no one brought up the works of Â Carlos Bulosan , Jose Garcia Villa or Â Jessica Hagedorn.

Instead most of my relatives and some older Filipinos nodded, smiled and while theoretically supportive were regularly vocal in suggesting I should go into medicine (For those of you who need context, the medical field especially nursing is where most Filipino success stories are usually found).

It would be in my 20s that Iâ€™d find there is more than just a Filipino-American literary history but also a Filipino-American artistic tradition that is still in development. There are signs of this from Tagalogue showcase in the Nuyorican a few days ago to Â Dante Bascoâ€™s performance at Def Poetry Jam.

Even the current Poet Laureate of Queens is a Filipino poet, Paolo Javier.

This is a pretty exciting time to be a Filipino writer but it isnâ€™t without its burden. Like all legacies, the Filipino-American culture with itâ€™s own brand of generosity, integrity and loyalty also has its own history of misogyny, homophobia and racism. Some of this clear even in the art.

Inheriting a checkered history is not a new concept in life or fictional ones. Tim Drake took the Robin mantle from his very troubled predecessor, Kyle Rayner bore the Green Lantern responsibility from a possessed villain, & Jaime Reyesâ€™s forerunner was viewed as a joke by many of his peers.

What Iâ€™ve learned is that we can draw strength from those who came before us, gain wisdom from their mistakes without shunning their example or ignoring their story.

And for me finding a Filipino-American literary tradition later in my life is a blessing, to be surprised by itâ€™s rich past and to know I can watch its continued development. To find it in my 20s is to find it at a time when I am wise enough not to fear it, not to be overly oppressed by preconceived notions (even by members of my own the group) of what it means to live up to this heritage.

To find it now is to be bold enough to say I am not limited or defined by my race. Instead, I help to define people of my race as those who are not limited.