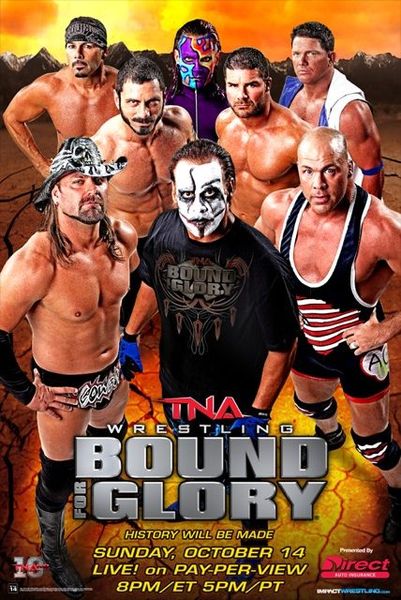 X- Division Champion Zema Ion vs. RVD: As always, the crowd was firmly behind RVD from the get go. Both men came with guns blazing, pulling out one high-flying move after another. In about 8 minutes, the match was over with RVD the new champ.

Television Champion Samoa Joe vs. Magnus: Joe and Magnus throw bombs at each-other all match, showing just how well each of them plays the powerhouse. The end of the match saw both men trading submissions, with Joe locking in an RNC.

James Storm vs. Bobby Roode: King Mo special Referee: King Mo is going to need therapy after being up lose for this one. The best feud all year and perhaps TNA history came to a close with a knockdown-drag out war between these veterans. As the classic “face,” Storm was busted open early & proceeded to bleed like a stuck-pig. What followed was a whirlwind of chair, thumbtacks & a shattered announce table. With a Last Call to the jaw, Storm closed this epic chapter in TNA.

Joey Ryan vs. Al Snow: Ryan is bringing sleazy back and Al Snow is his first victim. Aside from a few power moves, the match was nothing special. Yes, Snow managed to bring Head into the mix, but was ultimately hit by an interfering Matt Morgan. Ryan, true to form, picks up the easy win and his TNA contract.

TNA Tag Team Champions Christopher Daniels and Frank Kazarian vs. Kurt Angle and AJ Styles vs. Hernandez and Chavo Guerrero: In true heel fashion, the WTTCOTW powder out and let the challengers have at each-other and did they ever. (Total) Nonstop action followed, with frequent tags and no man holding back. Every combination one could ask for, including the obligatory AJ vs. Daniels was balls-to-the-wall. Perhaps the poster boy for tag team “heavies,” Hernandez got the pin fall.

TNA Knockouts Champion Tessmacher vs. Tara: Tara makes short work of her former protÃ©gÃ©e, finishing her with what is easily one of the best finishers in wrestling, the Widow’s Peak.

Bully Ray and Sting vs. Aces & 8’s: With a handcuffed Joseph Park at ringside, Sting & Bully got to work. Ironically, this badass biker gang is comprised of skilled wrestlers? Anyway, the match proceeds like a normal tag, until a third A&8 member comes through the crowd. Parks eventually breaks his cuffs and brawls to the back. Sting called for a table, but another gang member would interfere and pick up the pin fall.

After the match, Hogan cleared the ring of all gang menses, keeping one behind and unmasking him. It was Devon.

TNA World Heavyweight Champion Austin Aries vs. Jeff Hardy: The crowd does not want to hate Aries- no matter how much heat he tries to get. The action spilled to the outside quickly, with Hardy getting Aries acquainted with the guardrail and ring post. Back in the ring, Aries unleashed a flurry of kicks, but Hardy would pull out a powerbomb/facebuster not seen since his WWF/E days. An attempted Swanton is met with a Shelton Benjamin-esque leap to the top rope from Aries, and a huge head scissors and a kick out by Hardy.

A stunned Aries is caught with a Twist of Fate, a Swanton and a new champ.