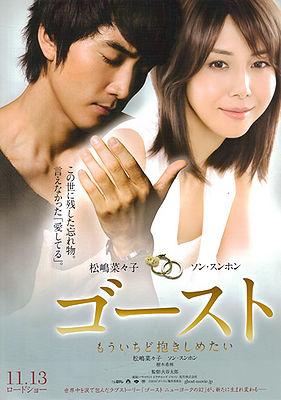 â€œGhostâ€ left a lasting impression on the American from. It gave us the iconic pottery scene with Patrick Swayze and Demi Moore with â€œUnchained Melodyâ€ playing in the background and one of Whoopi Goldbergâ€™s best roles. Itâ€™s essentially a classic. So much so that Japanese director Taro Ohtani did a Japanese remake in 2010. With all due respect to the original Ohtani has made a remake thatâ€™s actually entertaining.

Sometimes remakes take liberties with the original to a point where the story is unrecognizable. This is usually true when itâ€™s remade into a different culture. Here itâ€™s obvious Ohtani respects the source material and has made a remake that does not feel like itâ€™s from a different culture.

One reason the original was so well conceived was to due to Swayze/Mooreâ€™s chemistry. Luckily, Matsushima and Song haveÂ similarÂ chemistry. They really work off of each other and they do make one great and cute on-screen couple. They both should be applauded for that.

Not all is perfect in this remake. Firstly, the version of â€œUnchained Melodyâ€ used here is terrible. One of the main reasons the pottery scene is so memorable in the original was because of this song. The poor cover of the iconic song made the scene in this version lose all impact the original had. Second, the murder was just disappointing and confusing. Thereâ€™s no way the murderer was traveling fast enough on that motorcycle to cause her to fall hard enough to crack her skull. Third, the psychic isnâ€™t as likable or have Â as lasting an impression as Goldberg had. She played the Japanese medium role well, but she just didnâ€™t have the same spunk or the same attitude that made Oda Mae Brown so memorable.

The Japanese remake of â€œGhostâ€ may not be equal to the original, but it still holds up on its own. Matsushima and Songâ€™s perfect chemistry plus a respect for the source material give this movie enough weight to hold its own despite some flaws. Fans of the original will enjoy this just to see a different take on the movie they love.

About Rocco Sansone 839 Articles
Rocco Sansone is a â€œman of many interests.â€ These include anime/manga, video games, tabletop RPGs, YA literature, 19th century literature, the New York Rangers, and history. Among the things and places he would like to see before he dies are Japan, half of Europe, and the New York Rangers win another Stanley Cup.