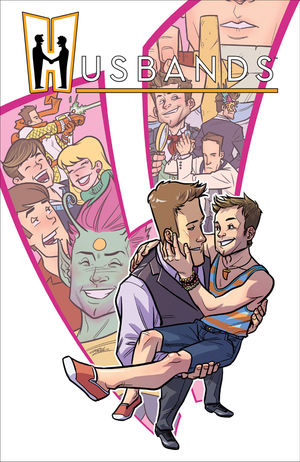 With a list of television writing credits under her belt that include â€œDinosaurs,â€ â€œEllen,â€ Battlestar Galactica,â€ â€œTorchwoodâ€ and â€œBuffy the Vampire Slayer,â€ Espenson is easily one of the most versatile writers in entertainment today.

Review Fix: What was the inspiration for the show?

Jane Espenson: Brad Bell was working on an idea for an online show he wanted to make featuring himself as the “Cheeks” character and including Alessandra Torresani as the character that became Haley. We tossed it back and forth, looking for that hook that gave the show something to say. When Brad came up with the idea of basing it around same-sex newlyweds, we realized that this wasn’t just a fun project to do together, but a chance to say something on a topic that were both passionate about.

Review Fix: Considering that, what made you guys go from online sitcom to comic book?

Espenson: We had just completed work on season two of Husbands and we were doing a lot of interviews where people joked about my sci-fi-filled resume… a lot of people joking, asking about “Husbands in Space,” and it started to sound good. Also, the characters weren’t leaving us alone, and when we thought about putting them in different iconic comic book worlds, we realized that we could chart the continuing development of the relationship in a really entertaining way through the books.

Review Fix: How is working on a comic book different from writing for television?

Espenson: It’s more like directing, actually. It’s much more about the pictures than the words, generally, so you have to think very visually and block the scenes. Also, you have room for a lot less story, so even a really minimalistic dialog writer has to cut back â€“ and neither Brad nor I is a really minimalistic dialog writer. We had the added dimension that we were working with characters that hadn’t been depicted before, and with a series of different artists, so that was new, approving character designs for each issue. That was a lot different than TV writing, although I guess it’s a little similar to casting.

Review Fix: How does it feel to have the praise of comic book legend Neil Gaiman?

Espenson: Amazing. Husbands has found some really high-level fans for both the show and the comics. Joss Whedon and Jon Cryer and now Neil Gaiman among others â€“ that just blows us away. We love the show â€“ it’s our lives for much of the year, but it’s hard to remain objective, so when other people love it, that means so much. And Neil Gaiman â€“ wow â€“ that’s some high octane fan power.

Review Fix: What do you think you learned from working on “Battlestar Galactica,” “Torchwood” and “Buffy the Vampire Slayer” and how do you think it translates to Husbands?

Espenson: I think I learned joke writing from my work before that, on sitcoms like Dinosaurs and Ellen. I think those shows, the dramas, taught me to strip the poetry out of writing. Human beings under stress either get terse and blunt, or stammery and indirect, but in neither case do they tend to get eloquent. I think shows like those, that value writing from life, instead of from what you’ve heard before on other shows, I think those kinds of shows teach you to write dialog that can move people even without any ornamentation. I try to use that in Husbands, as does Brad â€“ we’re always starting from what would someone really say, how would this person react in real life, and then finding the funny take on it.

Review Fix: Why should fans of the show check out the comic?

Espenson: Because it’s Cheeks and Brady and Haley. You know them, you love them, and seeing them in these contexts is fun.

Review Fix: Why should comic fans check out the comic?

Espenson: Because it takes comic book tropes and twists them in interesting and non-random ways to make a point.

Review Fix: How do you want this series/stage of your career to be remembered when compared to your previous works?

Espenson: I want Husbands â€“ in all its incarnations – to be seen as me and Brad stepping forward with our own reason to tell a story.

Espenson: The way the humor has bite. It comes out of real places, often real frustrations, and it is true to the underlying point. We never sell out our point of view to make a joke. The jokes are there as expressions of the point of view.

Review Fix: What do you think the future holds for the series?

Espenson: Time will tell. We are confident there will be a season three. The comics are being collected in a hardcover edition. Beyond that, who knows, but I felt, from the day we came up with the premise, that this is a show that deserves to exist, and I still believe that.