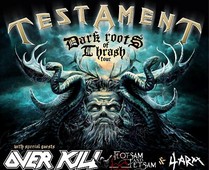 Thrash metal titans Testament have announced a headlining U.S. tour in support of their new album “Dark Roots of Earth” with Overkill, Flotsam and Jetsam, and 4Arm as direct support.

The tour will run from January to February 2013.