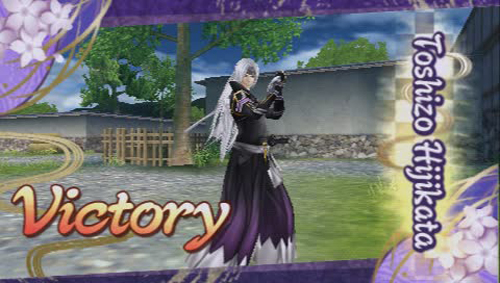 Hakuoki: Warriors of the Shinsengumi blends the beautifully-told visual novel, Hakuoki: Demon of the Fleeting Blossom, into an action-packed adventure game thatâ€™s fun for those new to the series or fans from the beginning! Become stronger and more deadly as one of six legendary samurai, while you battle imperial soldiers, other samurai, and blood-thirsty furies. Hakuoki: Warriors of the Shinsengumi contains two storylines where players can either follow the events of Hakuoki: Demon of the Fleeting Blossom or play in an alternate universe where events unfold very differently.

Shinsengumi Chronicle â€“ Change history as any one of the six main characters in. Play in an alternate universe where you control the fate of the Shinsengumi!

Shinsengumi Memorial â€“ Step into the shoes of your favorite samurai and play through battles from Hakuoki: Demon of the Fleeting Blossom. Join in on the action as you battle your way through Kyoto!

Skirmish Mode â€“ Replay past battles to add some more kills or level up your character to be more deadly. Unlock two addition characters in this mode and duke it out on your favorite stages.

Fury Mode â€“ When a characterâ€™s life is spent, he will enter Fury Mode, unleashing a ferocious killing machine, able to tear down anyone that gets in his way. However, becoming a fury too many times can unlock a particularly bad ending.

A Special Character Guide with Artwork â€“ Each retail copy of Hakuoki: Warriors of the Shinsengumi comes with an exclusive character guide featuring all eight playable characters from the game. Learn about each of these legendary warriors, and see them in their traditional Shinsengumi outfits and Western attire in this 16-page, full color digest!

For those who pre-order the retail version of Hakuoki: Warriors of the Shinsengumi, Amazon will be offering an exclusive 22â€ bandana showcasing your favorite warriors. Featuring all eight playable Hakuoki warriors, this 22â€ bandana can be framed, used as a traditional furoshiki (Japanese cloth bag), worn, or you can decorate your purse (or man bag) with it!
Hakuoki: Warriors of the Shinsengumi is rated Mature (M) by the Entertainment Software Ratings Board for blood, strong language and violence.

Released in February 2012, Hakuoki: Demon of the Fleeting Blossom drew praise from critics and fans alike as an original and beautifully-written visual novel. EGMnow.com hailed its story as something â€œyouâ€™ll want to experience until its end, filled with interesting characters, lovely artwork, and a great English translation.â€ Hakuoki â€˜s success in Japan and the US has spawned an anime that is currently being published in the U.S. by Sentai Filmworks.

Located in Tokyo and founded in 1994, Idea Factory has developed and published many well-received RPGS and innovative visual novel games. Some of their more popular titles include, the Record of Agarest War series, Hakuoki: Demon of the Fleeting Blossom and Blazing Souls. Idea Factory is part of the Idea Factory Group, which comprises Idea Factory, Compile Heart and Design Factory.

To learn more about us, see the information on the Idea Factory web site: http://www.ideaf.co.jp or http://www.compileheart.com

About Aksys Games
Founded in 2006 in Torrance, California, Aksys Games Localization, Inc. is a localization studio and visionary video game publisher specializing in the Japanese-to-English translation of games and committed to publishing unique, multicultural, high-quality interactive content for all current-generation platforms with its talented staff. Its lineup of games include the Record of Agarest War series, Zero Escape: 9 Hours, 9 Persons, 9 Doors (Winning â€œBest Story/Writingâ€ Awards from IGN and Nintendo Power), Zero Escape: Virtueâ€™s Last Reward, and the acclaimed BlazBlue fighting game series. More information about Aksys Games and its products can be found on the companyâ€™s website, www.aksysgames.com.