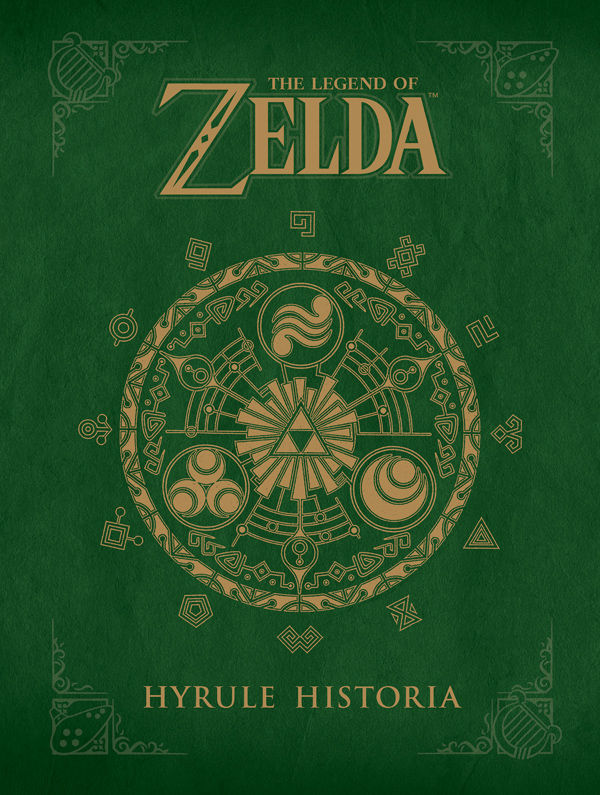 Ever since Ocarina of Time exploded onto the N64 scene, way back in the olden times of 1998, Legend of Zelda fans worldwide have wondered one thing: Are there any straight lines at all with this story? Well, Nintendo has finally decided to (hopefully) end the countless pieces of daily fan mail, and released their comprehensive compendium of Legend of Zelda lore. Within this glorious tome lays the answer, and so much more. This is a literary adventure through video gaming history.

The opening from beloved Zelda mastermind, Shigeru Miyamoto, absolutely sets the tone that will follow through the entire book. Passion, care, and love went into this series, and that got passed down to the book itself. The emotional connection that everyone involved has with this series is truly palpable, and no less so from Mr. Miyamoto himself. This was far from a mere project; this was a marriage.

Beginning with the appetizer of â€œThe Legend Beginsâ€, we are taken on a visual tour of â€œSkyward Swordâ€, this will be a treat for all of the visualphiles in the crowd. We get to see all of the various designs for the game, from Link and Zelda themselves, down to the lowliest wild creatures. Scattered all throughout this chapter is flavor text from the various project members for the game. These small touches add up, suggesting further possible connections between the games.

On to the main course, â€œThe History of Hyrule,” likely the reason for about 95% of the purchases of this book. The time line provided restructures the cobwebbed lore of â€œThe Legend of Zeldaâ€ into a reasonably (considering the source material) linear bridge through video gaming history. Bringing the interconnections between the games into a very revealing light, it weaves a comprehensible history without making it seem as if it was pulled out of thin air. Needless to say, despite how well done and in depth the history is, there shall of course remain a bastion of detractors and naysayers. However, with the release of this official compendium, they shall be few and far between.

After that deliciously filling meal, we have some snacks in the form of â€œCreative Footprints,” another smorgasbord for any self-respecting art fan. Unlike â€œThe Legend Beginsâ€, this section is expanded to engulf the near entirety of the series. And not just artwork, oh no. Dungeon designs, storyboards, sketches, all are included, representing games throughout the series. Any art student worth their easel will be drooling over the revealed layers upon layers of design that went into each and every detail. Even those without a particular passion for visuals will surely enjoy getting to see their favorite characters be drawn before their very eyes.

For a scrumptious dessert, we have a very special surprise: a Skyward Sword manga, created by Akira Himekawa, which acts as a corollary to the video game itself. Even without being attached to the book, this manga could have done well by its lonesome, with a combination of both well-written dialogue and lovely artwork.

All in all, this book is a must have for any Zelda fan, or any avid video game fan in general. It is well worth the already reasonable price, and will be re-readable for years to come.