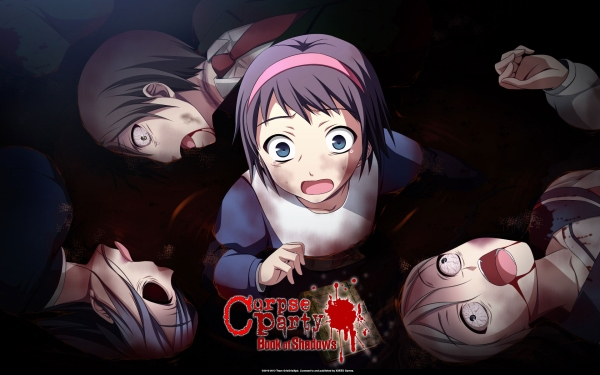 The original â€œCorpse Partyâ€ was a risk that ultimately paid off for Xseed in 2011. With the PSP on its last leg, the developer cranked out an eerie story based thriller that satisfied. Two years later however, the sequel, Book of Shadows doesnâ€™t capture the magic the first one had.

The story for this sort of direct sequel is that the entire cast is trapped in a time loop and is back in Heavenly Host Elementary School. This time the game has seven (eight if certain requirements are met) chapters that feature scenarios that are different than the first game so there will be plenty of new plot points. Most of the chapters are anyway; others are back story for certain characters.

Unlike the first game, which felt like a 16-bit RPG, â€œBook of Shadowsâ€ tends to opt for a visual novel approach where the only â€œgameplayâ€ is choosing what the character does, choosing where to go on a map and a first person section where you click items. This loses the overall creepiness that the first one had. The exploration, visuals and sounds are what made the first one so scary, especially when you had to run away from a psycho or ghost. This one is more like reading a â€œchoose your own adventureâ€ horror novel.

That does not mean that the game is not at all scary or creepy. Whenever those parts do arise they do give the gamer that nice little shiver down their and a few little â€œWTFâ€ moments thrown in. One of the creepiest moments is when a character is possessed by an unknown number of ghosts and is saying some genuinely scary things. That scene will give plenty of playersâ€™ nightmares for a while.

Of course, the strong writing and strong likable characters add to the overall experience. You will form bonds with these characters, feel their pain when they get mutilated by a psycho or ghost and you will feel their strong emotions when they are screaming bloody murder when they are getting unspeakable things done to them.

The only downside with the story is that it relies heavily on the events of the first game. If you have never played the first game, you will have no idea on whatâ€™s going on and whom the characters are.

One of the best things this game has is all the unlockables it has. These include stills from this game and the first if you transferred the save data. Music from the game and student IDs from the first game make a comeback so keep your eyes peeled. The best of these unlockables is the mini voice actor interviews. Hearing what the voice actors have to say about the game and their experience during recording is a great insight on what they felt on the game. Some of these are genuine delights to listen to, especially Seikoâ€™s, Mayuâ€™s and Ms.Yuiâ€™s.

â€œCorpse Party: Book of Shadowsâ€ may not have the gameplay or the creepiness of the first game, but strong characters and story make for one genuine scary experience. The unlockables are also worth doing all the different paths.