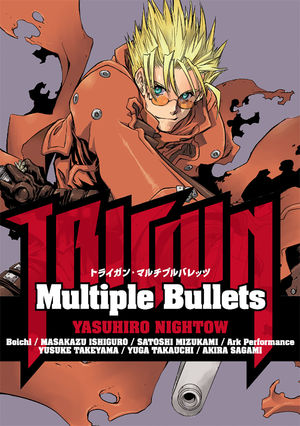 â€œTrigunâ€ has two types of fans. the ones that love it until the ending. And the others who love it in spite of the ending. Such is the case with â€œTrigun: Multiple Bullets,â€ a collection of comics that take place in different times during â€œTrigun.â€ While it hits the sweet spot some places, it misses completely in others.

The first story is a two-parter by Yasuhiro Nightow called â€œTrigun: Badlands Rumble-Extra: Showdown with the Dodongo Brothers in Honeycombed Village.â€ Here, Vash and co. are called in to help a village thatâ€™s been rampaged by the Dodongo Brothers. What ensues is one big gunfight after another. Itâ€™s pretty exiting with â€œTrigunâ€™sâ€ usual comedy thrown in for good measure. The problem is the ending leaves something to be desired. The art also looks like it was drawn by a novice who attempted drawing manga for the first time.

â€œTrigun: The Lost Plantâ€ by Boichi shows Vash way before he was â€œThe $$60 Billion Man.â€ Here, he is asked by a plant to kill its child, one which will destroy the universe if born. The problem, as any fan knows, is that Vash never kills. The story itself and its conclusion is one of the better stories in this collection. Here, we see Vash, who normally has the mental capacity of a seven-year, do some complex thinking to fix the problem. The artwork is also the best out of the bunch. Boichi uses some intensive forms to make some stunning art. The first few color pages are poster quality.

â€œDenizens of the Sand Planet,â€ by Satoshi Mizukami is about Zaj, the â€œChief of the Wormsâ€ and Tran, an â€œangelâ€™ (plant, actually) who wonder from town to town to determine if humans, plants and worms can coexist with each other. This is one of those philosophical themes found in â€œTrigunâ€ that easily resolves itself at the end of the story. The characters of Zaj and Tran are interesting even though nothing happens in the story.

â€œArk Performanceâ€ by Les Enfants is a weird one. Itâ€™s not a comic; itâ€™s a story with pencil illustrations thrown in. The story reads like a telling of the legend of Vash and Wolfwood. Itâ€™s a decent â€œlegendâ€ and well narrated in the way it should, in these typical legend crawls. The illustrations also look like your typical sacred drawings that show up as part of these legends.

Another weird one is â€œMil/Mer TVâ€ by Yuga Takauchi. Milly and Meryl have a TV show and they spend most of the comic trying to waste time because Vash bailed on them. The comic is drawn in the Yonkoma (vertical four panel) style which is perfect for this story. It’s off the wall funny and, along with the cute but funny art style, will make you laugh.

â€œRaijin (Thunder God): Risingâ€ by Yusuke Takeyama seems way out of place. A Samurai named Rai is protecting a village tries to teach a young boy his way of fighting to protect him and his sister. Despite the decent story and great art, this really has nothing to do with â€œTrigun.â€

Finally thereâ€™s â€œCutting is Fightingâ€ by Akira Sagami. Itâ€™s a comedy routine where Meryl tries everything to cut Vashâ€™s hair. Thatâ€™s really it. This has cheap laugh written all over it and you will give Sagami one. Whatâ€™s funnier is that he put a ton of effort into his pencil style art that looks fabulous.

â€œTrigun: Multiple Bulletsâ€ has plenty of interesting stories and great art to offer despite some misses here and there. â€œTrigunâ€ fans will devour this collection in an instant while casual readers will still find plenty to enjoy.