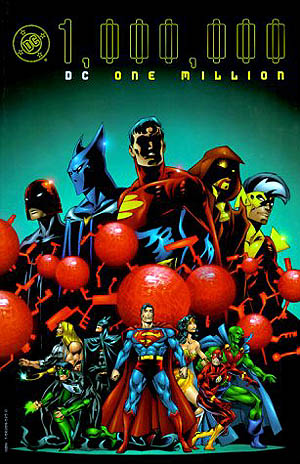 With the latest Superman trailer you can definitely tell they are trying to make a character normally portrayed as campy in the mainstream to something more contemporary.

His new origin story working around themes about the phobia of â€œthe otherâ€ and the universal experience of searching for our own significance in an alienating world. In other words grounding the character to make him more relatable for wider appeal.

Iâ€™ll admit, I wasnâ€™t a big fan of Superman when I was younger because I couldnâ€™t relate to the boy scout. Spider-Manâ€™s terrible luck with women and Batmanâ€™s working through problems with his mind was more relatable.

But then there was DC One Million, a 853 century spanning epic time-travelling story to save the universe which paid major homage to Superman.

It was a story arc that gave me my first glimpse to Morrisonâ€™s genius, foreshadowed my love of epic era-spanning stories, and made me understand the appeal of Superman.

Superman wasnâ€™t always the character you strived to be as much as the other superheroes I think. Weâ€™d like to be a good person but we like more to be someone who overcame our limitations and face down dire odds.

Characters who couldnâ€™t turn coal into diamonds with their bare hands were easier characters to tell that story.

His adventures however, when done right, expresses your life problems and victories for the epic significance they are to you. Essentially showing you in art what it is you feel inside.

When you lose someone you deeply care about it does feel like your world has been destroyed (origin story), like the artifacts connected to their memory almost effect you immediately and physically (kryptonite weakness), and you wish you could go back in time to have a chance to just chat with them briefly before they were gone (All-Star Superman).

On the other side of the emotional spectrum, when you are falling in love, it feels like youâ€™ve searched the edges of the universe and found the one person that would ever exits who youâ€™d be willing to wait centuries just hold in your arms again (DC One Million).

The appeal of Superman was not that you strived to be him as much as you experience important episodes in your life like him.

Because it is strange to think that you won’t feel like your world was shattered when you lose even one person you love.