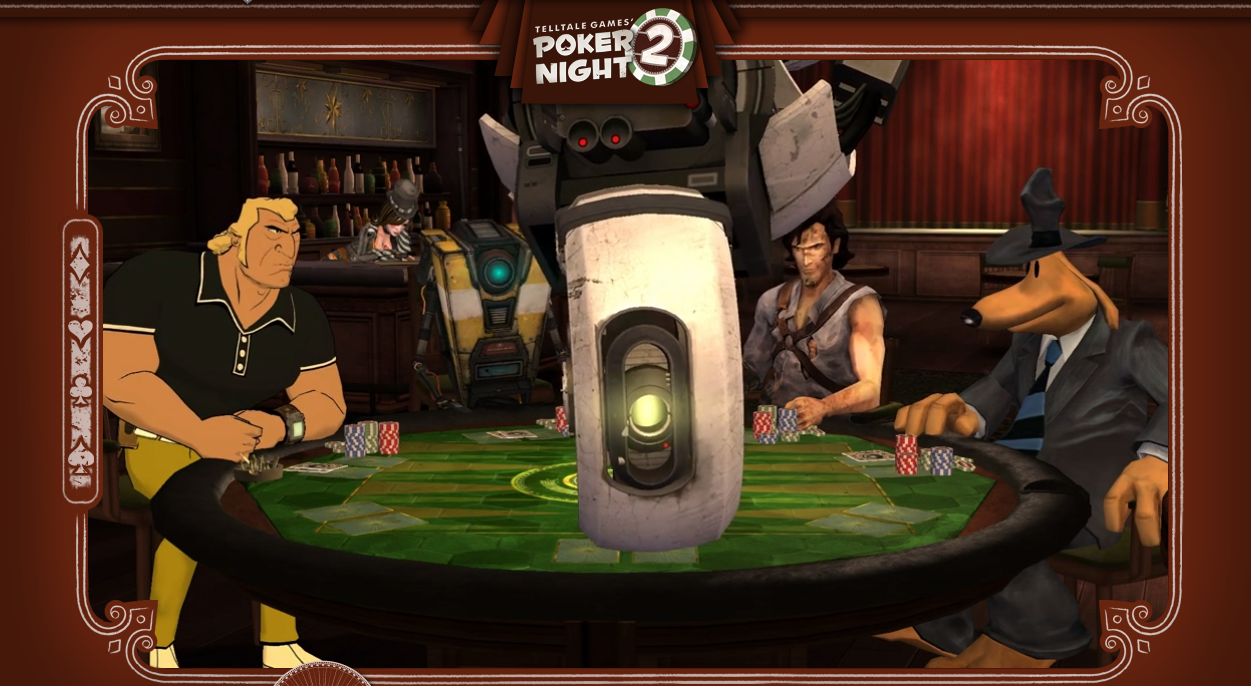 At first glance, mixing characters from Borderlands, Evil Dead, The Venture Bros., Portal and Sam and Max and making a poker game out of it all wouldnâ€™t work. But with plenty of voiceovers and a solid poker engine, â€œPoker Night 2,â€ an admittedly â€œunnecessary sequel,â€ is a more than capable card-sim. Oozing with personality and unlockables, â€œPoker Night 2â€ turns your iPhone into a late night game of cards you wonâ€™t want to fold on.

This has everything to do with the conversation between the characters. Claptrap, Glados, Brock Samson, Ash Williams and Sam work together wonderfully. The banter during gameplay is weird, irrelevant and insane. Youâ€™ll love it. Every character has plenty to discuss and boy, do they. From their epic adventures on television, film, comics and video games, the five-some let it all loose. Potty-mouthed, lewd and silly, â€œPoker Night 2â€ is entertaining before the cards are dealt. At the same time, the words that are exchanged between players and the dealer during each hand are easily the gameâ€™s biggest selling point.

Regardless of the smart use of the creative licenses, the actual poker game is well-executed. Players respond realistically to behavior such as raises, checks and all-ins. But donâ€™t let the whimsical nature of the game fool you; â€œPoker Night 2â€ is tough. More often than not, youâ€™ll find the players skilled and smart. Playing â€œPoker Night 2â€ could actually make you a better poker player. At the same time, the game flows at a reasonable pace, which makes it easy to play a few hands on mass transit or in between work or console gaming.

There are a few reasons not to go â€œall-inâ€ though. While there are plenty of voiceovers in the game, it all gets repetitive . After a while, youâ€™ll just want to play poker, making all the silliness overdone. While that takes hours to actually happen, you will get bored of the chatter. Thereâ€™s also no way to bypass it all either and just get to the game quicker. The 439 MB file size is also a bit much for iPhone owners with limited hard drive space.

In spite of the few misgivings, poker aficionados looking to get their card on, who have the hard drive space, will find it a stimulating and challenging sim that never lets you forget the characters across the table.

The game is also available on the PC, MAC, 360 Arcade, Steam and Playstation Network.

After the first segment of Impact Wrestling, changing the channel felt like an impulse. Showing Robert Roodeâ€™s family and the...