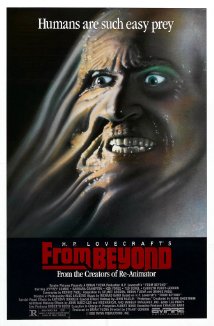 A gruesome, sickening, yet old-school horror flick H.P. Lovecraftâ€™s “From Beyond” will make you cover your eyes in fear. From the creators of the Re-Animator (1985), this thriller will leave you with a grotesque feeling. With an excess amount of eye sucking, brain eating and disgusting cannibalistic monsters, it will make a horror fanatic squeal with excitement.

The weird plot revolves around two scientists create a machine called the â€œResonatorâ€ that sends them to a parallel universe, where they meet a man-made monster with an appetite for human brains and a sadistic attitude to match. Crawford Tillinghast (Jeffery Combs) must find a way to put an end to the machine and its chaos.

The movie is an old school horror fanâ€™s dream. With an animatronic monster and graphics that can only be found in the 1980s, this film will not disappoint. Every sound effect matches the exact moment of an action or horror scene. The screams of characters becoming victims is perfect, from the beginning of an attack till the end. Even the creepy action of the creature, as it rips anything to bits of pieces, are oozing with charm.

The best part of the film by far is the gore. Watching the monster suck the brains out of the eye of his victims is an astounding scene. The regular horror fan will love this process. The monster has a huge similarity to the parasite from the movie â€œThe Thing.â€œ Its drippy, slimy and sickening in form. With its sadistic personality makes it the perfect antagonist.

The camera work in the film is solid. Even when a victim was being dragged away, there was a facial shot to catch the fear. The music is also eerily bone chilling. Richard Band’s music, a symphony of violins and drums gave the movie a certain thrill.

Even though this film has its moments, it does have some flaws. One of the main flaws is the dialogue. Simple and lacking in the content that can capture an audience, most of it is just random stuttering and clichÃ©.

The disc set comes with special features such as interviews with the main characters and even a commentary from the director, Stuart Gordon. The editing room has lost and found clips and an interview with the composer of the film. Stuart Gordon even talks about the inspiration he got from the movie â€œThe Thing.â€

â€œH.P. Lovecraftâ€™s From Beyondâ€ is an entertaining romp with a lot of content on the DVD. In a time of pop horror, â€œFrom Beyondâ€ is a movie that simple scares a person using actual horror instead of shock value.