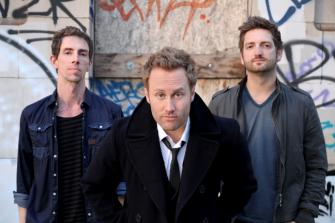 If the names Clayton Stroope (Vocals), Drew Cribley (Guitar) and Paul Niedermier (Drums) sound familiar, itâ€™s because youâ€™ve heard them before. The Bay Area band Midnight Cinema is a reincarnation of sorts of the Gold selling band Thriving Ivory and will release their self-titled debut EP on July 9, 2013.

All of the songs on the five-track EP cover the spectrum of the ins and outs of relationships, love and life (track listing below). And beginning today, you can get a free track â€œHurricaneâ€ from their upcoming EP on Midnight Cinemaâ€™s website.

After having huge success with Thriving Ivory and following their self-titled Wind-up Records debut album on June 24, 2008 – the album reached #1 on the Billboard Heatseekers chart on the strength of certified Gold single “Angels on the Moon,â€ selling over 500,000 copies; they were also chosen by VH1 as a â€œYou Oughta Knowâ€ artist, and their second studio album, Through Yourself & Back Again which was released on September 14, 2010.

Their relentless touring schedule took a toll on the band and while on the road in support of Through Yourself & Back Again, personal issues arose and founding member Scott Jason decided to part ways with the band. The remaining three band members continued with the tour. It was during a stop in New York when Clayton, Drew and Paul met with Gregg Wattenberg and Derek Fuhrmann for a writing session. Subsequent sessions followed; they felt they something special immediately starting to build and with this new burst of adrenaline and creativity, Midnight Cinema was born.

Midnight Cinema will make their debut with a special performance at CafÃ© Du Nord in San Francisco on July 23, 2013.