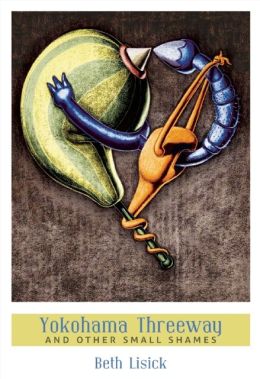 The 48 short essays in Beth Lisickâ€™s “Yokohama Threeway” address a multitude of incidents, all of them woven around the theme of shame. There are confessions in which Lisick recounts behaving badly as well as cringe-inducing reportage about her most embarrassing moments. There is also the shame of missed opportunity, including the oh-so-familiar recognition of the perfect comeback that dawns minutes [or sometimes hours] after it should have been delivered.

The mix works and the collection, slim at 121 pages, is highly engaging and tremendously entertaining. Furthermore, itâ€™s hilarious and resonant.

Take a section called Office Holiday Party. In it, Lisick recalls carefully preening for her companyâ€™s annual soiree, donning a pricey vintage cocktail dress that she thought was eye-catching and chic. All went wellâ€”conversation and witty repartee flowed easilyâ€”until she was summoned by a colleague.

â€œLisick, we were just sitting here discussing whether we should tell you or not. Douglas thinks we should, but I was all for not saying anything.â€

â€œWhat?â€ Tell me what?â€ Lisick asks, her panic escalating with every word.

â€œThis story takes on a new cast with time,â€ she continues, â€œBecause when I tell you now that my dress was tucked into my nylons, exposing my entire flank to the room, and it had been that way since Iâ€™d exited the bathroom roughly fifteen minutes before, what mortifies me most is that I was wearing suntan-colored nylons and thought they looked sophisticated.â€

Time to crawl into a hole, you say. Well, maybe. But not Lisick. Instead, she shares the tale, thumbing her nose at the idea that personal humiliation is best boxed, buried, and forgotten. And why should it be? Donâ€™t we all have the equivalent of Lisickâ€™s bare-assed exposure, albeit differently packaged?

Whatâ€™s more, weâ€™ve all had blush-worthy moments and times of self-indulgence that are hard to look back on. Nonetheless, Lisick lays bare the many times she has done the wrong thing out of laziness, expedience, or disinterest. In Hooker, for example, she reports that she saw a woman get catapulted from a moving truck, unceremoniously landing in the middle of a busy street. â€œI did not stop to check on her,â€ she admits. â€œI didnâ€™t roll down my window and ask if she was okay. I didnâ€™t call anyone. I didnâ€™t do anything. I waited for her to get up and limp away and then I went to work.â€

Similarly, when her older brother was taunted by bullies because of a disability, she opted for silence rather than defend him. She also remained mute during numerous business dealings, pretending to understand the ins-and-outs of contractual obligations when she did not. Predictably, this led to a financially ruinous conclusion.

Then thereâ€™s sex. The collectionâ€™s title story chronicles a three-way liaison [two women and one man] which in hindsight was a colossal mistake. In fact, Lisick concludes that her involvement â€œhelped a mediocre man live out a classic scenario from Penthouse Forum.â€ In addition, she kisses many a frogâ€”and worseâ€”in an attempt to feel liberated, connected, and powerful, behavior sure to hit a nerve with anyone who has struggled to find a meaningful romantic relationship.

Yes, pangs of remorse crop up in “Yokohama Threeway” but the collection never becomes heavy or penitent. In fact, Lisick reveals herself to be a smart, savvy, irreverent, and wise observer of human behaviorâ€”not only her own but also that of her San Francisco communityâ€”using levity to explicate the many ways we betray ourselves and disappoint others.

At the same time, Lisick celebrates our uncanny ability to pick ourselves up, dust ourselves off, and plod on. By making private abashment public, she pulls no punches. Indeed, by chuckling at lifeâ€™s whammies and zingers, she leaves us clamoring for more.