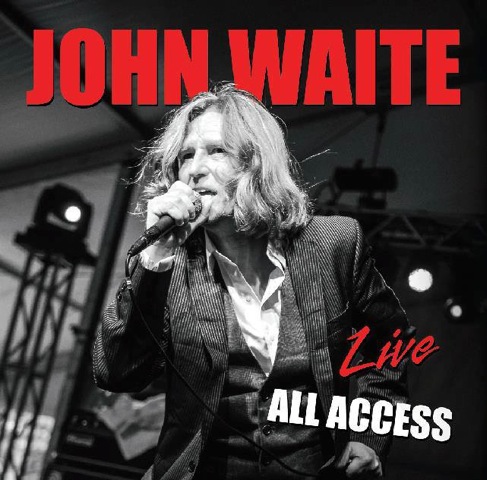 Live: All Access is the new live album from John Waite. The album was released on iTunes June 11th and is a sparkling collection of live recordings of songs from the ‘Rough and Tumble’ album, from the solo albums ‘Ignition’ and ‘No Brakes’ and from The Babys era. Waite’s trademark vocals are crystal clear and every bit as powerful as the original studio recordings. The No Brakes band consists of Keri Kelli on guitars, Tim Hogan on bass, and Rhondo on drums.

“It was a great timeâ€ states Waite. â€œKeri had been working his way into the songs. The energy was worth recording. I took a shot at capturing the energy. We were having a blast and it shows in the performance. I think it was a golden time. It cost a small fortune to record and some of the shows were just so good it was worth going after. The band has come a long way and I would like to continue to put something out every 8 months. It’s a great record….. Raw, no overdubs or bullshit. It’s the truth!!!”

John Waite has been successfully writing, recording and performing some of the most listenable, enduring and appreciated popular music for more than 35 years. He was lead vocalist for The Babys and Bad English. As a solo artist, he scored several international hits, including 1984’s “Missing You”, a #1 hit on the US Billboard Hot 100 and a top ten hit on the UK Singles Chart.
Live: All Access is available now on iTunes and in physical format at live shows, with copies soon to be made available on his website www.johnwaitethesinger.com

John Waite will be touring extensively in 2013 to support the effort.

For more information, check out the official website:
www.johnwaitethesinger.com

Breaking Bad Coverage: The End of an Era?

The crewâ€™s meth operation is in shambles following their successful yet tragic heist with partners singing their swan songs and...