Review Fix chats with Ben Haumiller, producer for EA SPORTS NCAA Football, who discusses this yearâ€™s entry of one of Electronic Arts college pigskin series. With the implementation of the Infinity Engine 2 and a bevy of other new additions to the series, Haumiller is confident that NCAA Football 2014 is the best college football game of this console generation.

Review Fix: Many casual football fans wonder what separates a college football game from a pro football title. How different is this year’s NCAA Football from Madden 25?

Ben Haumiller: While there are similarities between the two games, the differences between the two are quite vast. College football is much more of a celebration of the tradition and pageantry of each school than the arena rock anthems you hear blasted over the PA at a pro game. Thereâ€™s so much more innovation and variety to both the offensive and defensive styles. The read option isnâ€™t only a wrinkle added to throw the defense off, there are entire offenses built around the play. From the career mode standpoint, everything from recruiting to the Top 25 polls, to the bowl system differs from the pro counterparts. Oh, and NCAAâ€™s Ultimate Team has Bo Jackson, who you wonâ€™t find in Madden NFL 25.

Review Fix: What do you think loyal fans of the series expect when they pop in a game in the NCAA Football franchise? Are you confident you’ve provided that?

Haumiller: Longtime fans of the series are looking for an immersive college football experience. Our Dynasty Mode is one of the deepest career modes in sports video games and with the addition of Coach Skills, and the revamping of recruiting through the new Power Recruiting system the mode is even more engaging than ever before. Coach Skills allow you to unlock additional abilities for your coach that can help on the recruiting trail or provide boosts to your players during a game. Power Recruiting streamlines the recruiting process to make it a faster experience without sacrificing the depth that the recruitniks crave. On the gameplay side the additions of physics through the Infinity Engine 2 and the improvements in the option game add additional depth and realism to the game that weâ€™ve never seen before in the NCAA Football franchise.

Review Fix: What gameplay addition do you feel was needed the most?

Haumiller: Adding physics through the Infinity Engine 2 was definitely the biggest gameplay addition we added this year. The physics engine adds a whole new look to gameplay because we are no longer relying on pre-canned animations to determine the outcome of a play. With the Force Impact System physics are applied to things like stiff arms, hit sticks, and truck sticks which impact how the ball carrier and defenders react in each situation. For instance, on a stiff arm, if you hit them in the shoulder they will react appropriately and that shoulder will get knocked back. Bigger backs can knock down a defender with a big punch of a stiff arm, while smaller backs can do a little hand fighting with the defender to keep them at armâ€™s reach as they fight for more yards.)

Review Fix: What was last year’s biggest criticism of the game? How do you think the development team has addressed it?

Haumiller: I think the biggest criticism with the last yearâ€™s game was that it was starting to show its age. Fans felt that the old recruiting system had become tedious, gameplay was missing the physics engine, the menus looked too similar to the previous year, all in all things just felt too similar to the previous years. This year we put a big emphasis on making changes to the game that will help us shed that perception. The front-end menus have a completely different look, instantly making the game feel different the first time you boot the game up. Gameplay received big improvements through the Infinity Engine 2 and a big focus on making the option game as fun as possible to run. Additionally a lot of work went into making the CPU better at running the ball so that they can provide a more challenging and fun experience. Dynasty received the new Power Recruiting and Coach Skills. Ultimate Team was added to give gamers a new way to play the game by bringing in 2,500+ former college players to create your own fantasy college teams to compete against other gamerâ€™s fantasy college teams. Looking at the feedback from the demo and reading the message boards I think itâ€™s clear that people are excited by the changes weâ€™ve made and are looking forward to the launch of the full title to see all of these changes for themselves.)

Review Fix: What new feature in the game are you the most proud of?

Haumiller: I think we have been guilty in the past of adding new features but never giving gamers the proper training on how to use them. The new Skills Trainer is a great way to not only teach gamers the new features, but also is a great way for either a novice NCAA Football player, or someone whoâ€™s skipped a year or two, to learn some of the more complex mechanics in the game and make yourself a better player. This is the first year of this Skills Trainer and itâ€™s something we are looking to expand every year to help teach people more and more of the nuances of the sport of football.

Review Fix: For someone who’s never played an NCAA Football game, what do you think it’s biggest selling point is?

Haumiller: NCAA Football is the perfect companion piece for the real college football season. The game launches months before the real season kicks off, so you can get yourself geared up for Week 1 by playing through your alma materâ€™s 2013 schedule, and going deeper into the future years through Dynasty Mode. Once the season kicks off you can follow along and play the biggest matchups of that week as you get ready for Saturday, and you can always find a new team you want to start a dynasty with based on their real world performance. Last season there was a definite spike in the number of Dynasties started with Notre Dame as the year progressed and their undefeated regular season became more and more of a national story.) 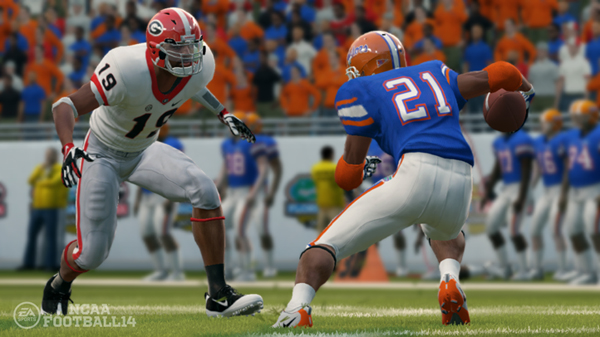 Review Fix: What do you think will get hardcore fans to come back again?

Haumiller: Coming out of E3, hardcore fans couldnâ€™t get enough of videos showing the CPUâ€™s ability to run the ball, and once the demo came out they were having a blast putting the game on the harder difficulty levels and having a more challenging game against the CPU then they have had in years. Combine the CPUâ€™s ability to run the ball with the option improvements and the Infinity Engine 2 and from a gameplay perspective hardcore fans have been very excited about this yearâ€™s game. On the Dynasty side fans love the Power Recruiting, but they are very excited to see how the Coach Skills add new life to the Dynasty experience by changing how their own team, and all of the other teams, play and recruit based on what skills they unlock.

Review Fix: How do you want this game to be remembered a few years from now?

Haumiller: I want this game to be remembered as the best of this console generation. There were so many great things that came together this year to provide the most complete NCAA Football experience to date and I think this yearâ€™s game will be remembered as the game that shrugged off the perceived staleness of the past and helped usher in the new era of college football.