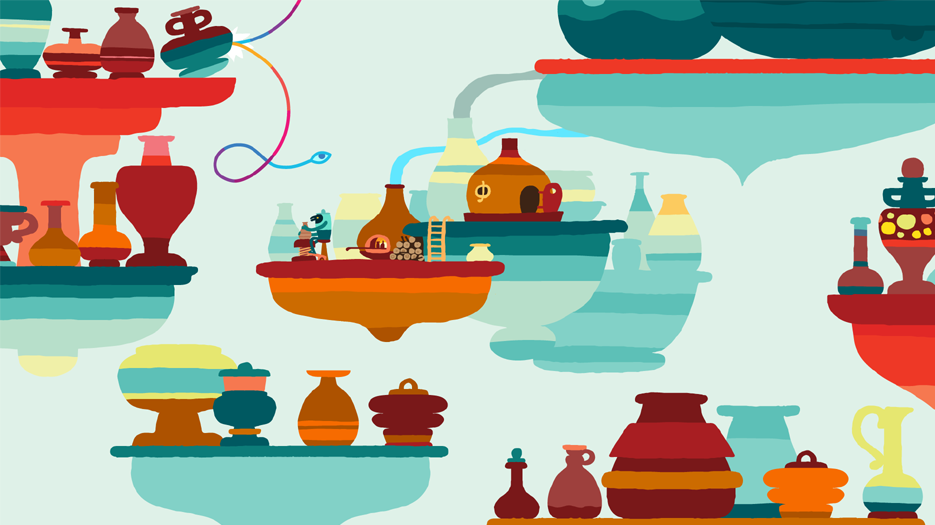 From Honeyslug Games, the art of Richard Hogg and SCE Santa Monica Studios comes a different type of game aimed towards the casual gamer. “Hohokum” can only be described as â€œSnakeâ€ meets â€œThe Yellow Submarine.â€

You take control of the â€œLong Mover,â€ a snake-like creature whose purpose is to help the inhabitants of the strange and multi-colored tie-dye world. As you drift around the two-dimensional plane, everything your touch reacts to your presence. Leaves on trees recede or shake when you brush up against them, birds fly away and daffodils lose their petals. The world reacts to you.

Even the character itself is colorful, based on which direction you face, the â€œLong Moverâ€™sâ€ tail changes to a different color, in addition to the tailâ€™s change, the PS4â€™s â€œDual Shock 4â€ t sensor bar changes to the same color as the tail, a subtle, but intricate detail.

Since the game is non-linear, you can stop at any point on any map and go to a different one. If you no longer gain enjoyment from a level, you can change to any other level with no penalty, maybe go from flying a kite, to helping a fisherman find a mermaid.

Along with the diverse hues and bright tints, the incorporation of a unique sound track adds to the feel of “Hohokum.” The musical track is produced by Ghostly International an independent record label. The pair of eclectic color and vibrant music blends into a swirl of imaginative magic.

“Hohokum” blends music, puzzles and ocular stimulation in order to draw the player into its addictive simplicity. At first it looks childish and simple, but upon further evaluation, it is complex and maybe even wondrous.