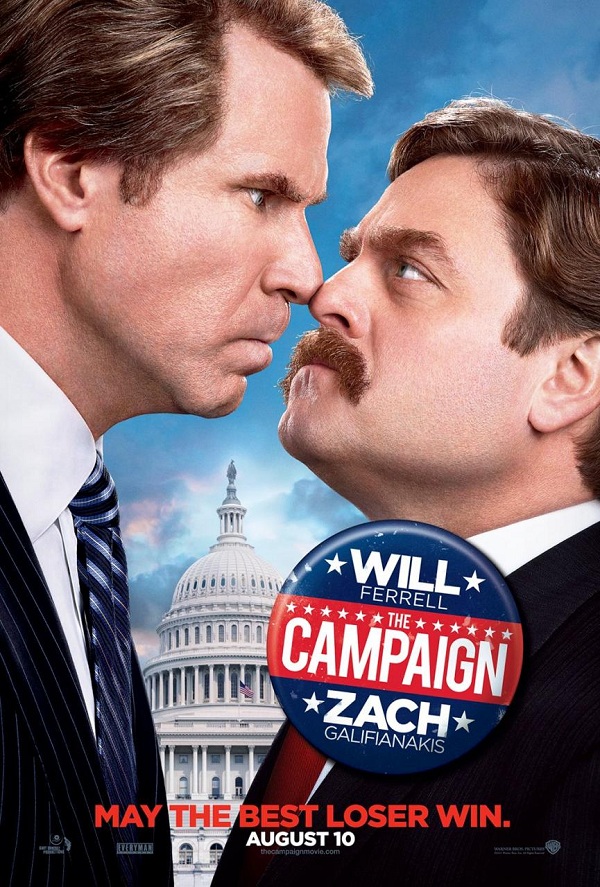 If â€œThe Campaignâ€ were a meal, it would be a decadent whole baked chicken with the outside skin browned to a golden perfection swimming in a colloidal mixture of aromatic herbs, spices, and grease. However, one bite will have you begging to go to Boston Market as you realize your dinner, although prepared to look like perfection in all its aesthetically pleasing glory, is nothing more than bland, under-seasoned and tough to chew.

â€œThe Campaignâ€ has all the elements to make it incredible, but falls short in its potential.

Emmy award winning Jay Roach, well known for directing the â€œAustin Powersâ€ movies took the reigns in â€œThe Campaignâ€ and has once again sat himself down as comedyâ€™s godfather continuing his legacy of supreme king of comedy direction. Unfortunately, â€œThe Campaignâ€ did not rank amongst its elder brothers and sisters like â€œMeet The Fockersâ€, 2004.

The two opposing main characters of the film were played by actors that were skillfully chosen. Will Ferrel (â€œThe Anchormanâ€, 2004) and Zach Galifianakis (â€œThe Hangoverâ€) share a compatibility on screen that cannot be denied.

Each actor plays the role of two congressional candidates from North Carolina – Ferrell as Cam Brady, the unrivaled candidate with plenty of charisma and hairspray to woo the ladies, and woo the ladies he does as he campaigns for his fifth consecutive term. An uncouth decision Brady makes goes public and taints his image. This prompts the all powerful, wealthy Motch brothers (played by John Lithgow and Dan Aykroyd) to create an opposing candidate out of the awkward Marty (Zach Galifianakis) to wipe out Brady and carry on their capitalistic plans to turn North Carolina into a sweatshop town.

Of course, what better plot could there be than the story of our countryâ€™s own dirty politics? The screenwriters of â€œThe Campaignâ€ seemed to think so, but the execution was nothing more than lackluster and dull.

The two hopefuls battle it out in trash-talking debates, candidate approved television ads blaspheming each other, and one candidate having sex with his opposerâ€™s wife to prove a point. The campaigns of each are dirty and scandalous, but one victor succeeds to become the rightful candidate.

However, the movie is occasionally humorous and will warrant you a surprising laugh or two in its 85 minute running time. The jokes however are not genius. You will find dull witted humor in its unapologetic vulgarity and crude lines that make you wonder if it is a sin to laugh at a punched baby. And of course, Will Ferrell continues to provide the inarticulate shouting that has been seen countless times before.

The plot of the story was adequately entertaining, but the humor seemed to cater to a younger, immature demographic.

Perhaps immature was the goal here, but, sorry kids, itâ€™s rated R. So, for us adults, only a handful can stomach this dumb humor. Still, two stars for the idea of a good plot and good casting.