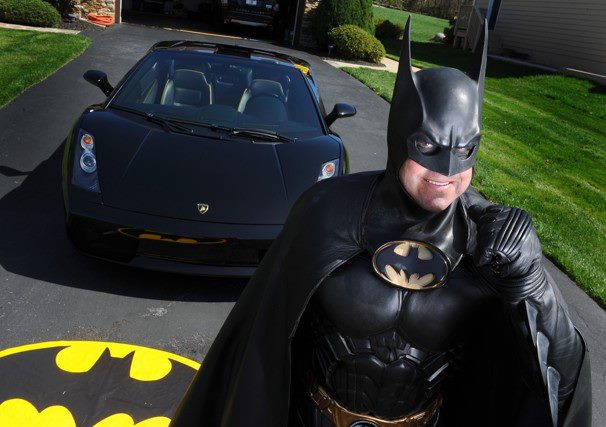 Over a decade ago, Baltimore businessman, Lenny B. Robinson, dressed as the Gotham Knight and his son, showed up unexpectedly to a childrenâ€™s hospital in Baltimore, Maryland. He currently spends his days visiting hospitalâ€™s across the country to meet and entertain pediatric patients.

Now 49, Robinson, more often referred to as â€œBatman,â€ continued his crusade at the Ronald McDonald House on 73rd street and 1st avenue in Manhattan, New York on Wednesday.

Robinson rolled up in his â€œBatmobileâ€ around 4 p.m. for a meet and greet with patients at the center, taking pictures and handing out gifts until his departure at 6 pm.

The Ronald McDonald House is just one of many stops on Robinsonâ€™s list.

â€œWeâ€™ve been to Shriners childrenâ€™s hospital in Boston, we’ve been to Nationwide hospital in Ohio, [and] we’ve been to Montefiore in New York,â€ said Cindy Tanenbaum, 35, Robinson’s director of public relations, naming just a few places theyâ€™ve traveled to. â€œWe’ve been to about 50 different hospitals across the country.â€

Robinsonâ€™s custom-made bat suit costs about $5,000 and weighs 35 pounds. Each piece was inspired by a different Batman movie: the mask from Batman (1989 version), emblem and gloves from Batman Returns, boots from Batman and Robin, body suit from Batman Begins and the belt from The Dark Knight Rises. â€œI have a little bit of each,â€ he said.

â€œ11 years [ago], I started visiting kids in hospitals in the Baltimore, Washington DC area, and it just snowballed from that point forward,â€ said Robinson. â€œI owe all that to my son, Brandon. He was obsessed with Batman, as many four-year-old kids are, and he and I decided to go to a hospital and make a difference.â€

Tanenbaum says that they one day plan to visit hospitals outside the states and maybe even travel across seas, though this would come with complications.

â€œWe have a lot of requests for Europe, the problem is, itâ€™s hard to get the â€˜Batmobileâ€™ out there,â€ she said. â€œWherever he can drive to, like Canada, itâ€™s a lot easier. Itâ€™d be fun for [Robinson] to do international stuff, but it would be difficult to get the car there.â€

Next on Batmanâ€™s long list of stops was Winthrop childrenâ€™s hospital in Long Island on Friday.

â€œAt the end of the day you must ask yourself: ‘did I make a difference?â€™â€ said Robinson. â€œAnd that answer, had better be yes.â€