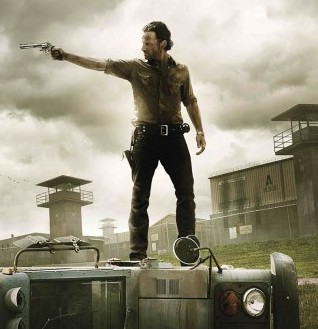 In â€œInternmentâ€ Herschel is at his finest.

With a bible in one hand and a knife in another, Herschel shows viewers how to live â€œrightâ€ in the world of Walkers.

It is a masterful move on the part of the writers to have this episode follow the one in which Carol is banished by Rick. That episode was aptly titled â€œIndifference.â€ It showcases Carolâ€™s cold and calculated approach to life. Her inability to show any kind of remorse for taking the life of two innocent people is frightening. For some her justification for her actions made sense. The scepter of death is everywhere. As Herschel rightly says, â€œYou step outside, you risk your life. You take a drink of water, you risk your life. And nowadays, you breathe and you risk your life.â€ The dire circumstances of the living seem to call for making brutal choices. They seem like hard choices, but they are not. In fact, they are the easy choices in a world full of Walkers.

â€œInternmentâ€ conjures up Loriâ€™s last words to Carl: â€œPromise me you will always do what’s right. It’s so easy to do the wrong thing in this worldâ€¦If it feels easy don’t do it, don’t let this world spoil you.â€ It is easy to plunge a knife in the back of a sick person who is weak and delirious from fever. Juxtapose that to Herschelâ€™s actions and viewers find a man fighting to keep his soul.

Like Jonah, Herschel is in the belly of the whale in the quarantine ward of the prison. He walks from cell to cell, checking on the sick. He has exposed himself to whatever has made everyone sick, but he still keeps on comforting those who are close to death.

Itâ€™s how he treats the dead that is most telling of his character. He refuses to let those who are sick witness the dead turn to Walkers. He carries the dead bodies to an isolated room before they become Walkers. His respect for the living is so profound that he will not put them to death until they have fully changed to a Walker. Herschel uses Steinbeckâ€™s words to explain his actions, â€œA sad soul can kill you quicker, far quicker, than a germ.â€ He recognizes that life is about more than basic survival. Itâ€™s about loving and respecting all life, even at the risk of losing oneâ€™s own. Itâ€™s how one keeps his or her humanity while surrounded by Walkers.