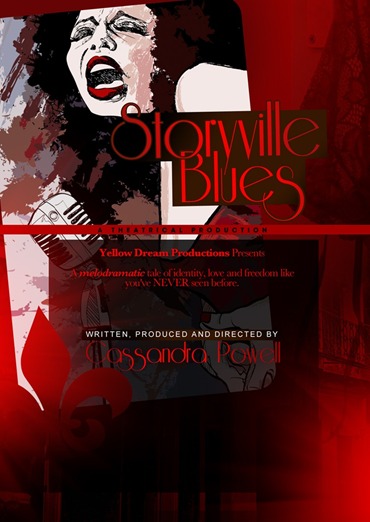 Review Fix chats with playwright Cassandra Powell about “Storyville Blues,â€ her production currently running at this year’s Midtown International Theatre Festival in New York City, which explores the journey of African -American women in a forbidden brothel during the Jazz Age in New Orleans.

Cassandra Powell: My passion for history, African American culture and womenâ€™s rights resonates throughout the play. But it was my love for poetry, which first inspired me to write this piece. I started performing one of the poems at local open mic venues in Newport News, Virginia and received great reviews. Then, I decided to create a collection of poems/monologues, which depicted the diverse experiences of African American women. Â After researching brothels in New Orleans (I was fascinated with the cityâ€™s culture after visiting a couple years prior), I stumbled across Storyville, a real-life, red-light district in New Orleans, and it became the setting of my play. Then, I interweaved each womanâ€™s story/voice with the historical context and events of New Orleans to show the underlying voyage of identity, voice and freedom that connected each woman.

The rich, vibrant culture of New Orleans during the early 20th century captivated me, and really inspired me to create a full production emblematic of the cityâ€™s culture and the women of Storyville district. The play first premiered in 2012 at the Ella Fitzgerald Theater in Newport News, VA to nearly sold-out audiences. Then, I moved to Atlanta and presented the production again at the 14th Street Playhouse to another full house. It was then selected for the Atlanta Black Theater Festival, DC Black Theatre Festival, and it will now be performing at the Midtown International Theatre Festival (MITF) in New York.

Powell: Throughout the process, I have learned more about my own voice and identity as a woman. Also, I have learned the diversity and dynamics, which help to shape the African American culture. The deep connection of my own personal story as a young woman growing up in the deep South to other women was also a great learning experience.

Powell: Storyville Blues transcends races, but it is definitely a womanâ€™s story. So I think that many of the women theatre patrons will enjoy the piece most, particularly African American women. But I have received rave reviews about the play from many male audience members as well.

Review Fix: Tell me about the cast? What makes them so special?

Powell: My cast is hardworking, talented, and most importantly humble. Each actor has discovered and continues to rediscover her/his own voice and relationship to the character as we continue to perform the piece, which makes it so special. Also, the connection that we have with each other really helps develop the chemistry and bond that each of the women share in the brothel. (Cast: Cassandra Powell, Tunisia S. North, Ashley Lawrence, Jules Nobles, Tanya Freeman, Trivon Howard, Chris Montgomery)

Powell: My favorite element of the show is the monologues, which are accompanied by instrumentals. The monologues paint each of the womenâ€™s stories, and it really compliments the theme of the play. Also, the narration, which is performed by the brothelâ€™s owner (Daddy Ju Ju), is really colorful and shows the vibrant culture of New Orleans, the womenâ€™s personalities, and the overall history of Storyville.

Review Fix: Bottom line. Why should someone see this show?

Powell: Storyville Blues will take you on a personal journey and help you to discover your own story, voice and identity. It explores the history of the deep South, New Orleans in particular, Storyville, and African American women during the early 20th century, which is extremely educational for all audiences. Ultimately, this show will enlighten, educate and empower diverse theatre patrons.

Powell: I want the production to be remembered as a beautiful story of the plight of the African American woman, and their courage and fight to find love, identity and freedom.