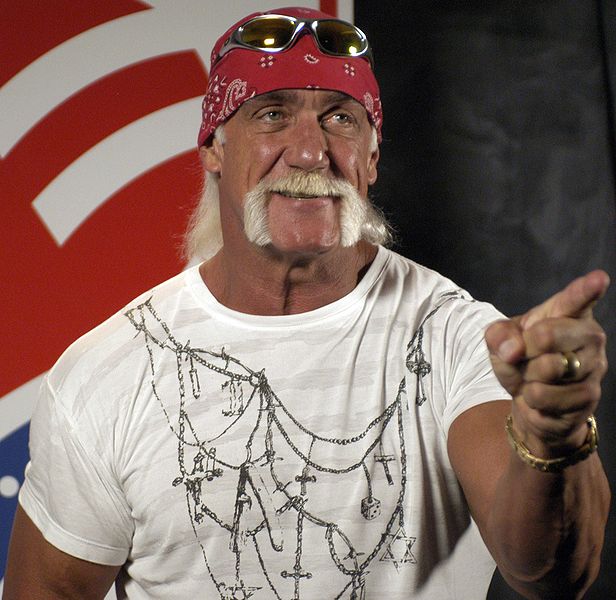 In an over the top world with over exaggerated characters, professional wrestling audiences aren’t always quick in identifying themselves with a character. Thanks to loudspeakers, musicians and the power of hearing, entrance themes have been as big towards establishing a wrestlers identity with an audience as a savvy move set or quick witted abilities on a microphone. Whether it be glass shattering, a static smattering or the pomp and circumstance of it all, entrance themes have defined wrestlers since the early days of Gorgeous George. The following 10 entrance themes have been synonymous with the wrestlers that embodied every note, chord, melody and rhythm while adding their own personality to top it off.

10. Bret Hart:- Hitman by Jim Johnston: The opening guitar riff to the song gave a quick alert that the best there is, best there was and the best there ever will be was coming to the ring. The theme song is very serious and to the point, much like Bret Hart the man and wrestler. It may not have been Stairway to Heaven classic, but the theme fit Bret’s all business, technical and execution based persona to a tee.

9. The Brood:-Blood by Jim Johnston: Coming up through the flames, the Gothic persona of the trio known as The Brood fit the Attitude Era like a glove on a hand. With their dark, demonic and disturbing antics, The Brood became one of the more popular factions of the Attitude Era, despite their brief stint. From the songs name, Blood, which described the head honcho, Gangrel’s favorite drink, the theme song’s dark riffs, disturbing whispers and heavy metal edge made an astute choice.

8. Randy Orton:- Voices by Rev Theory:The apex predator of the WWE always carried an unbalanced edge. So, with voices inside his head that talk to him, Voices by Rev Theory could be considered a match made in heaven. As lead singer Richard Luzzi shouts â€œI HEAR VOICES IN MY HEAD,â€ to begin the song, you know danger is lurking in the form of Randy Orton. From punt kicking Vince McMahon to assaulting the rest of his opponents, having a song that describes voices inside of his head dictating his every calculated but violent move make for the right tone.

7. Hulk Hogan:- Voodoo Chile by Jimi Hendrix: With the howdy doody Hulk Hogan of WWF’s past growing old and stale, fans longed for a change. That included changing from the hoaky Real American style theme song to a more edgy and cool sounding theme song. Courtesy of the legend Jimi Hendrix himself, Hogan coming out to one of Jimi’s all-time classics, all the while trying to portray a villain made for an interesting dynamic of bad cool guy.

6. CM Punk:- Cult of Personality by Living Colour: With a static interruption came the signal that the best in the world would be gracing us with his presence. From the songs upbeat tempo but inspiring lyrics of being a cult of personality, the likes of JFK and Ghandi, using the masses to portray a persona of change, this song became just as much the theme of CM Punk as it was CM Punk’s theme song.

5. Triple H:- The Game by Motorhead: The opening raspy voiced statement of â€œTime to the play the gameâ€ signified that the measuring stick of professional wrestling was about to put you to the test. For almost a decade and a half, the vocals of Lemmy Kilmister sang Triple H to the ring, fitting in with Triple H just as smoothly as Triple H fit in to the McMahon family. Long hair, cerebral attitude and a desire to be the best provided the proper mixture.

3. The Rock:- If You Smell by Jim Johnston: One of the most iconic superstars of any generation, Dwayne â€œThe Rockâ€ Johnson built a reputation and a fan base surrounding his ability of being an entertainer. With the entertainment came catchphrases that have since become a part of the English lexicon. Thus, opening the theme song with the iconic â€œIf you smell what The Rock is cooking,â€ and following it up with upbeat notes and keys that send electricity up and down your body, it confirms that The Rock is the most electrifying man in sports and entertainment.

2. The Undertaker:- Rest in Peace by Jim Johnston: The Undertaker is arguably the greatest character in the history of professional wrestling. Which makes it apropos that he would also have arguably the most fitting entrance music in the history of professional wrestling. For starters, three loud gongs signify the imminent arrival of the deadman and then a funeral dirge like theme song, evoking thoughts and emotions surrounding death, doom and gloom. It’s a timeless classic and will forever be synonymous with The Undertaker.

1. Stone Cold Steve Austin:- Glass Shatters by Jim Johnston: Typically, imagining a tough son of a b*tch with a mean streak, bald head and a drinking problem do not summon a visually appealing human being. However, if your vision isn’t appealing, you could stick it up your ass and that’s the bottom line. From the glass shattering, a large audience erupting and the most popular wrestler of all-time making his way down the ramp, â€œStone Coldâ€ Steve Austin’s theme song sparks a feeling of toughness, recklessness and an insatiable thirst to open up a can of whoop ass.