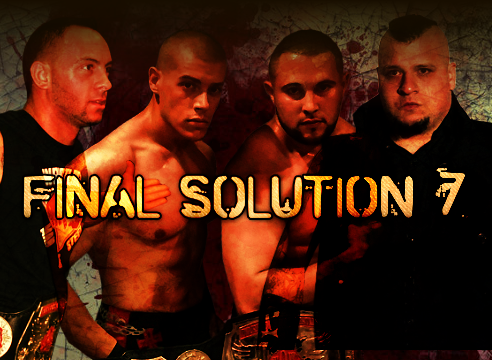 “Final Solution” was Staten Island’s Independent Wrestling promotion, Warriors of Wrestling’s last event of the 2014 and thanks to a beefy card and an appearance from WWF/E WCW mainstay Haku, it was on epic show that capped off another exciting year.

Pre-Show: J Jorge vs B.Luka: Jorge was able to outwit Luka in which he picks up a pin fall via holding the ropes for leverage after a failed sunset flip attempt by Luka.

Battle Royal: Naphtali Rodriguez wins an eventful battle royal which was filled with a number of hard over the top rope spills and eliminations.

No Limits Title match: Joey Ace vs. Aaron Stride w/Josh Maddox: A heavily contested back and forth match between the two opponent’s. Even though Josh Maddox interfered most of the match, Stride put on a pretty impressive in ring performance with the current No limits champ Joey Ace. Stride even kicked out after hard pile driver from Ace which looked like would for sure put him away for the three count. Ace once again like last month proved why he is the champ and picked up the win via a Buff Bagwell Blockbuster.

5-Man Elimination Match: Rude Boy Riley vs Logan Black Michael Massevre Chris Payne and Dirtbag Dan: Dirt Bag is the first eliminated after a Superplex from the top rope onto everyone outside of the ring. Chris Payne followed after a scorpion death drop from Michael Massacre. Massacre is the next to exit which left Logan Black and Riley as the final two. Trade off of hard elbow shots by both men followed by double knees in the corner gave Riley the upper hand. Eventually Black regained control and hit Riley with a strong Lariat, but couldn’t get him the win. Riley hit Black with a variation of the GTS for the win.

Haku vs. Chachi w/ J.Jorge: Chachi put up a good fight against Haku and even had control at one point. Haku midway through then match began overpowering Chachi. J.Jorge sensing the end, tried to get involved but was placed in the Tongan Death Grip alongside of Chachi and which gave Haku the pin fall.

Chain match: BA Kidd vs Doug Cannon: Kidd came right out of the gate very aggressive but a failed top rope attempt pushed the match into Cannon’s favor. While in control Cannon ever so often exchanges words with the crowd. Kidd manages to hit Cannon with a DDT on some chains, but Cannon kicked out after a two count. Cannon picked up the win by giving Kidd an over head press onto a stack of chairs. After the match Cannon continues to add further punishment to Kidd by hitting him with a Fire Driver.

Tag Team Championship match: EYFBO vs Dan Maff and Havoc w/Chico: Drastic starts the match off against Havoc and shows off his athleticism with a series of arm drags and an Enzeguri. After a switch his partner Ortiz handled his own against havoc but with some interference by Chico the match changes in favor of Havoc and Maff. A counter roll and drop kick by Ortiz gets him enough momentum to tag in his partner who picks up the pace. The match once again changes hand when Drastic’s front flip Senton into the corner is countered into a Powerbomb. Drastic shows toughness and resilience and is able to make the tag to Ortiz who is freshly energized and ready to go. Realizing The tag champs are just too much to handle Maff exits to retrieve one of the titles, which he strikes Drastic with causing the ref to call the match via disqualification.

Heavyweight Championship Match: Chris Steeler v.s Jasin Karloff vs. Team Torment (Jack Gallows and Jason Cross): The match started as an all out brawl. Jasin Karloff speared Jason Cross off the apron on to everyone, entourage included. Further along Torment destroyed Karloff with the security rail then changes focus to Chris Steeler. In the ring Steeler overcame the two-on-one assault and delivered a Super Kick to Cross, Gallows but also hit the ref accidentally. Steeler’s protege, Michael Massacre then came in with a chair and after Steeler refuses to use it, Massacre knocked him out with a chair shot.

With Team Torment looking to take advantage, Joey B came out to rectify the situation, nailing each Cross and Gallows with a stunner. This left Karloff with the opportunity to spear each member of Team Torment. Joey B attempted the three count for Karloff, but when a masked man emerged from the back, he ends Karloff’s chances of gaining the title. This gave Team Torment a moment to regain themselves and use the chair on everyone. The masked man reveals himself as one of Joey B’s most trusted officials who has just slapped the company with a major swerve. The ref gives Team Torment the pin fall victory and afterwards announces that W.O.W is now in the age of torment.