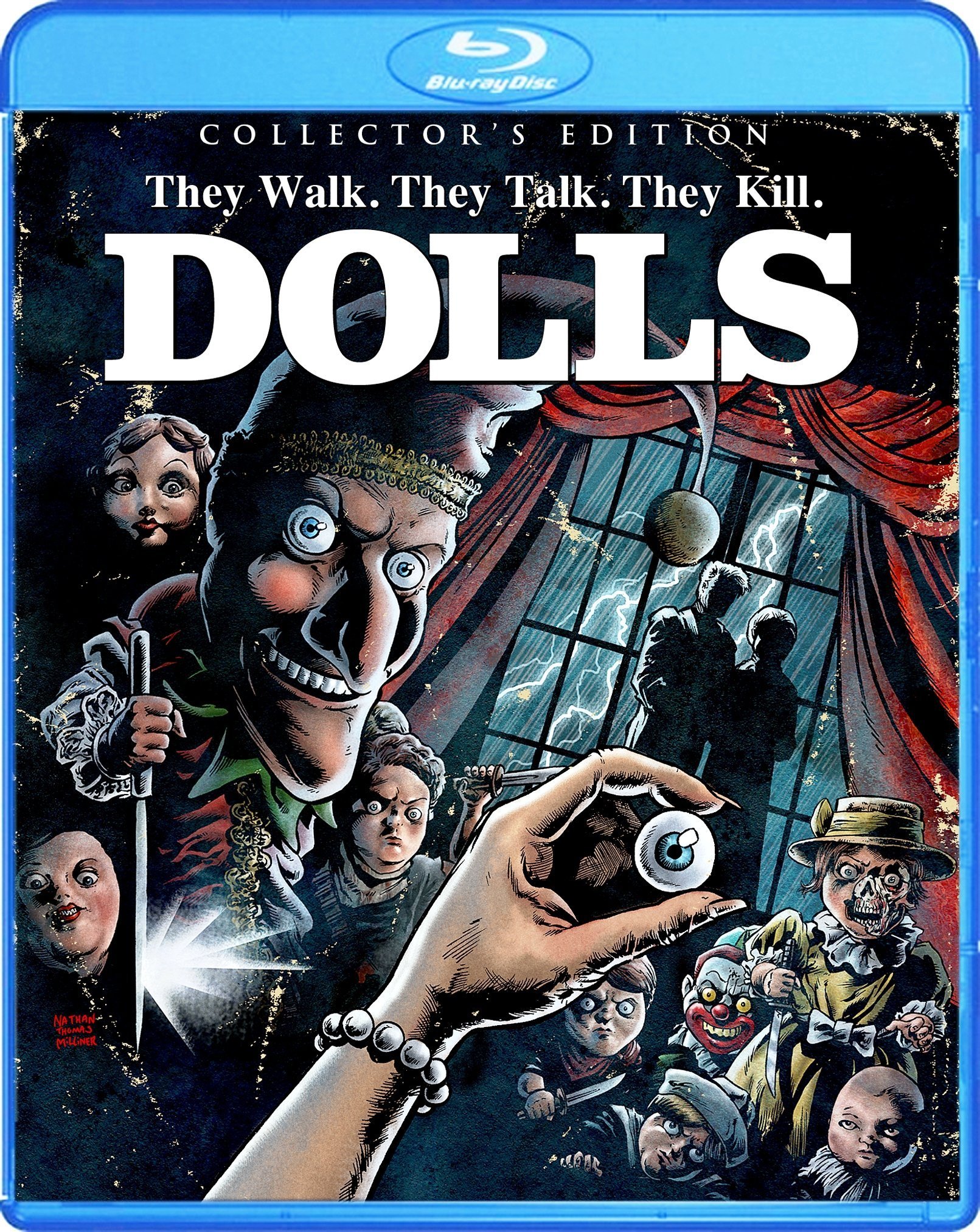 First thing most people think of when they hear killer doll is Chuckie. There is no denying his supremacy in the killer doll game, but what most people don’t think of is a great 1987 film, “Dolls.”

Directed by Stuart Gordon, “Dolls” is a fun ride that although like the little killers that take up the screen is on the short end, does not take away from just how good it is. Polished and restored by Shout Factory, the “Dolls” Collector’s Edition Blu Ray is the equivalent to a limited Mezco toy that’ll even make casual moviegoers dig in their wallet.

Judith (Carrie Loarraine) is spending the summer with her father and her sparkling stepmother (sarcasm), David (Ian Patrick Williams) and Rosemary (Carolyn Purdy-Gordon). Judith, like most girls her age, are imaginative—but do not tell that to her father who feels she needs to stop and grow up a little. Their summer vacation takes a detour when a huge storm forces them to seek shelter—and what do you know there just so happens to be a creepy old mansion parked in the middle of nowhere, that is not creepy at all (also sarcasm).

Much to Judith’s dismay, her father breaks in to the mansion after failing to get an answer at the front the door. The vacationers are welcomed by an elderly couple Gabriel (Guy Rolfe) and Hillary (Hillary Mason) Hartwicke, which is always a good sign in these genre pictures. The Hartwicke’s offer shelter and a good meal, once dinner is served another group comes barging in looking for a place to crash, two hitchhiking punk girls, Isabel (Bunty Bailey) and Enid (Cassie Stuart), and the man that picked them up, Ralph (Stephen Lee). The Hartwicke’s are happy to welcome in more victims, I mean, guests.

After dinner is all finished, the guests are shown to their rooms, Gabriel also shows Judith and Ralph his toy workshop where he makes his dolls, the ones he and his wife collect. This is where Judith and Ralph bond, which is not surprising considering how much of a jerk her father is.

Once everyone is in bed, the Hartwicke’s collectibles and life’s work begin to come to life and wreak havoc—it is up to Judith and Ralph, the two children—Ralph is one at heart—to figure out what’s going on and escape with their lives.

One of the horror’s greatest features is its ability to flip something we all love and turn it into something horrifying and “Dolls” does just that. The film has a great balance between horror, humor and light-heartiness that immediately hooks you. It is a 90’s Disney movie if David Cronenberg directed it.

The performances in the film have that children’s movie touch with a pure horror setting that is so unique it jumps out at you—but it would not be a great horror movie without some good ol’ killing and “Dolls” has some awesome kills including dolls teaming up to bash a punk girl’s head into the wall before finishing the job.

Now that we got all of the selling the movie to people who have never saw it out of the way, anyone who loves the film has to add this Blu Ray to their collection. A whole other article can be written on the special features packed into this one disc Blu Ray. The highlight of the goodies is the new retrospective made for the Blu Ray with new interviews with EVERYBODY.

The best thing about “Dolls” is just how accessible it is for anyone. There is a little something for everybody in the film that is a lean 77 minutes. Not only is this something a horror aficionado should pick up, anyone who just wants to have a good time need to do themselves a favor and get “Dolls.”

Check out this week’s Smackdown Live Power Rankings to see who starred in an excellent episode of the Blue Brand...