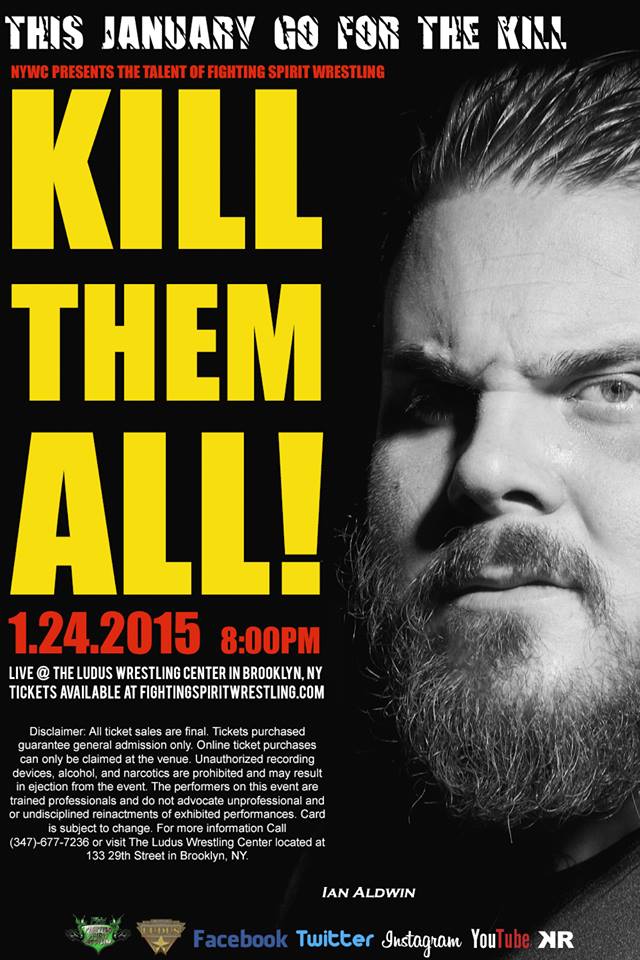 Facing tough competition from other promotions, Fighting Spirit Wrestling is stating their intentions clearly with the first show of 2015.

The bad blood and bad intentions have been simmering for a while now. And after Immortals Holiday ended, the future became just a bit more clear. From backstabbing and unexpected alliances to must-see match-ups and special attractions, the competition is about to be killed.

And with Vince Russo set to make a special appearance, will the FSW General Manager have any swerves up his sleeve?

First up, we’ll see a rematch between Selfie Josh and Ace Maravilla. At Immortals Holiday, Maravilla picked up a controversial win over Josh. The referee missed Josh and his shoulder being up. Will a rematch provide Josh with an opportunity to capture redemption or will Marvallia draw his trump card?

In tag team action, the three-time FSW Tag Team Champions, The Opposition will defend their titles against one of IMPACT wrestlingâ€™s biggest tag teams, The Wolves. Being one of the top teams in the world, The Wolves come into this match as heavy favorites. The Opposition will be opposed with perhaps their toughest challenge yet. They won tag team gold just last month but will the Wolves prey on the Opposition and end their title reign before it even starts?

One of the special attraction matches of the evening will see Juicy Product member, JT Dunn go one on one vs. Brian Myers. Myers, formerly known as Curt Hawkins in the WWE will provide Dunn with a challenging task. However, the battle tested Dunn has faced some of the top names around independent wrestling the past few months. Therefore, this match should be as even as any match on the card.

Just a month after claiming the Primiero championship at Immortals Holiday, Magma puts his title on the line against CZW’s Drew Gulak. Considered one of the most skilled technical wrestlers on the indies, Gulak will be Magma’s first real test as champion. Will Magma melt while faced with this fiery challenge? Or will Gulak reign supreme?

After being stabbed in the back by his former manager and friend PJ Stackpole, Mike Verna responds to the chair shot heard around the world. Will â€œThe Man of Steelâ€ soar to justice or does PJ have something in mind to stack the deck against the former heavyweight champion?

Making a special appearance, former TNA heavyweight and X-Division champion, Austin Aries will take on the former FSW Heavyweight Champion, Talon. Aries is no stranger to tough match ups and even though the veteran has seen and done it all, could Talon follow through with an upset for the ages? Or will the Greatest Man That Ever Lived provide the greatest victory that we’ve ever seen?

And in the main event, we will have the clash for the FSW World Heavyweight championship that just might change the course of FSW forever. â€œThe Indestructibleâ€ Joe Ettell will defend his title against the big and bad Ian Aldwin. Ettell has proven that his title reign isn’t a fluke, willing to jump out of windows and go through glass to defend his title. However, now with the devious mastermind PJ Stackpole in his corner, will Aldwin put a stop to Ettell’s reign? If he does, it will signal only one thing for FSW and Joe Ettell as champion………..The End.

For more information and tickets to the show, go to FightingSpiritWrestling.com.