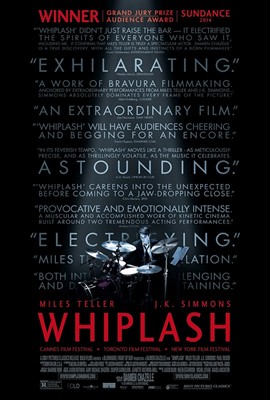 If you see one movie in the usually disastrous January, see Whiplash. Smooth from start to finish, it’s so much more than the story of a great drummer. It’s warm and inspirational- a tale that never makes you forget each characters determination and passion.

Andrew (Miles Teller) is an aspiring jazz drummer in a prestigious music school. He leads a quiet life; his time spent either watching movies with his father (Paul Reiser) or practicing his technique. Idolizing the great Buddy Rich, Andrewâ€™s wish is to one day join the ranks of the elite drummers in history.

He is eventually called up to be in the schools studio band, but finds it much more daunting of a task due to the extreme motivational techniques of the schoolâ€™s most respected professor, Fletcher (J.K. Simmons).

The film that came from a 2013 short is both written and directed beautifully by Damien Chazelle. All of Andrewâ€™s hardships, sacrifices and trials are well documented and resonate perfectly with the audience. By the end youâ€™ll want to give a standing ovation and maybe shed a tear or two.

The acting is superb. Teller plays the timid hero Andrew to a â€œtâ€ and Simmonâ€™s as Fletcher is an immaculate prick. The two have great chemistry that feeds off of each other.

A great side note: Teller who has played drums since he was 15 did all of the drumming for Whiplash- taking additional time for practice and lessons to prepare for the role.

Speaking of drumming, the score and musical scenes are incredible. Every emotion in the ensembleâ€™s notes can be felt. The intensity and raw energy of Andrewâ€™s playing is spot on.

Whiplash neither rushes nor drags throughout its 107 minutes. With a fantastic cast and an incredible story, Whiplash is one of the most inspirational films of all time. This is a movie for anyone who has been pushed around or told that they canâ€™t do something because Whiplashâ€™s moral is simple: prove everyone wrong.