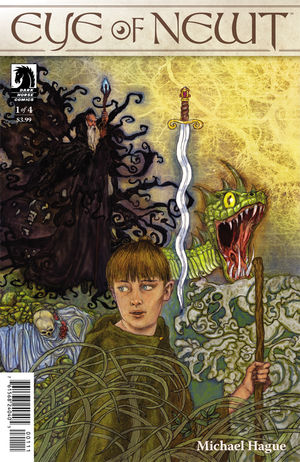 The story of a wizardâ€™s apprentice going on a wizardâ€™s quest is nothing new. They can be unforgettable to the point of becoming classics (any Merlin story and â€œHarry Potter,â€ anyone?) One of the more recent stories is â€œEye of Newtâ€ by Michael Hague and it is one of the best ones around.

The story is about a wizardâ€™s apprentice named Newt who must go on a wizardâ€™s quest. The quest entails going into the underworld to find a powerful item that will be used as a magic item for his staff. Of course, there will be plenty of obstacles to overcome.

The story reads like a medieval tale with narration (written in Gothic) and dialogue. This presentation works well in that it actually makes you feel like youâ€™re reading a tale that may have been written during the medieval period. On top of that the storyâ€™s pace does not falter; it keeps the readerâ€™s attention from beginning to end.

The characters, though medieval archetypes, are well written and likable. Newt himself is likable in that we do root for him whenever he does get himself into trouble against mythical creatures.

The art is also pretty spectacular. It gives off a classic medieval art feel. These are images youâ€™d see in many medieval books and even some artwork from that time. The creature designs are pretty inventive. They may only be a frog, dragons or a troll, but the skill used here is something to marvel at.

Speaking of marveling, Hague does this technique where an image wraps around the other panels. Itâ€™s a pretty unique technique that will make you marvel at just that image for a while.

Not everything is all that great though. Newtâ€™s high style looks like a weird bonnet that makes him look like a girl. Yes, there were some strange weird hair styles for boys back then, but even this is obviously for girls. Also, once you find out that Newtâ€™s real name is Arthur Pendragon (yes, that Arthur Pendragon) you will do a double take. This comic can be considered a sort of retelling of the Arthurian legend where Arthur was a wizardâ€™s apprentice. Knowing that, itâ€™s not as headache inducing as youâ€™d expect.

The only real headache, mind-blowing, vomit inducing part is the ending. The ending just comes out of nowhere- makes no sense whatsoever.

â€œEye of Newtâ€ is a marvelous wizardâ€™s quest tale with some great art. The only word of caution is that the ending is one of the worst endings youâ€™ll ever read in your life.