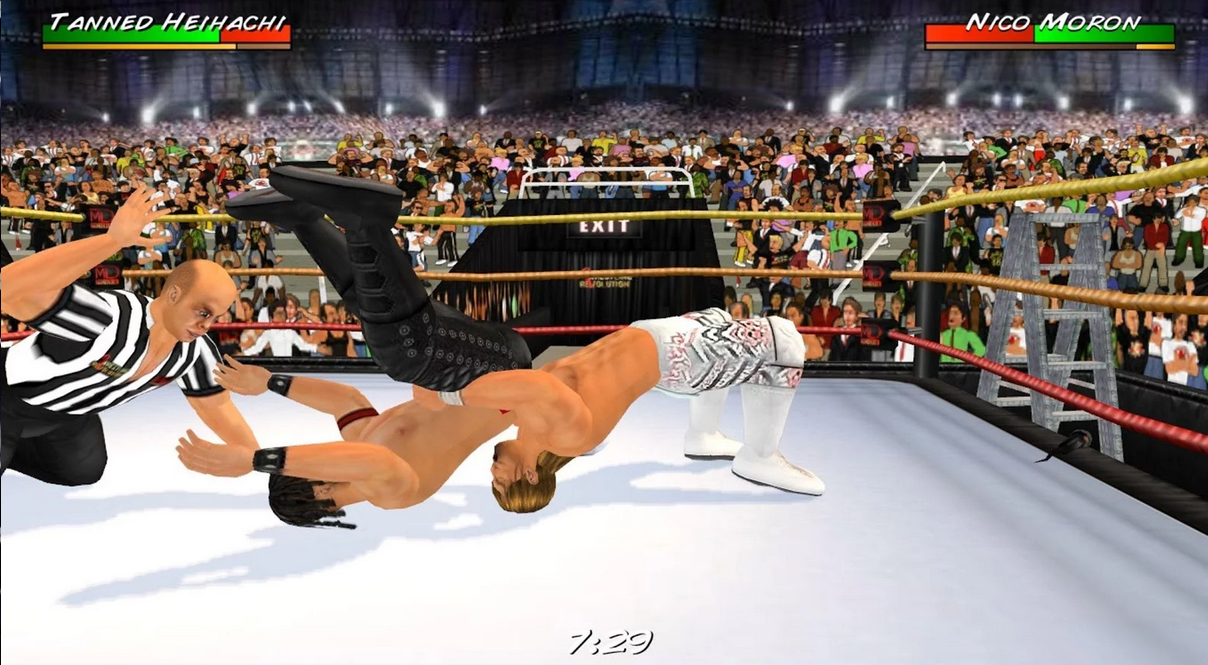 Review Fix chats with â€œWrestling Revolution 3Dâ€ developer Mat Dickie, who discusses the constantly updated project, as well as his connection with what he calls a â€œstableâ€ of independent wrestling game developers. Easily one of the most unique wrestling games on the market and one of the iOS and Androidâ€™s most talked about apps, Dickie lets us know what his goals are for the project, as well as what else heâ€™s working at.

Review Fix: What did you learn from the original “Wrestling Revolution” and how has it impacted this game?

Mat Dickie: The 2D game introduced a kind of â€œpuppetryâ€ where I could animate all of the different body parts separately and create the naturalistic movements that we like to see from wrestling. That made it possible for any move to segway into any other move at any moment, and then sell the landing differently each time. That extra layer of variety really helps a wrestling game, so my priority with the 3D game was to incorporate that. I managed to keep everything that was good about 2D and take it even further in 3D, so Iâ€™m very happy with how the concept evolved.

Review Fix: What made you want to take the series into full 3D?

Dickie: People assume that 3D is harder than 2D, but youâ€™d be surprised that it can often be the other way around. Making a 2D game is like animating a Disney movie, whereas 3D can be as simple as pointing a camera at an actor! As far as wrestling is concerned, I was able to depict a wider array of movements in 3D â€“ most of which looked better in the process. I was also excited about taking 3D gameplay further than anybody thought was possible on a mobile. I knew if I broke down that barrier there would be an audience for it, and now it has surpassed the 2D game to become the most popular I have ever made.

Review Fix: I love that new moves are being added to the game with every update. Are you watching wrestling every week and trying to keep it current? What’s your process?

Dickie: Ironically, I watch WWE less since the shows became longer! I simply donâ€™t have 3 hours of spare time, so I have to skim through it. Iâ€™m more likely to tune into the PPVs or look up a particular match on YouTube. But yes, whenever I do watch it I always spot a move that jumps to the top of my â€œto doâ€ list. My wrestling apps are some of the most consistently updated there has ever been, but people still canâ€™t get enough. A wrestling game is never complete because thereâ€™s always some new content that fans want.

Review Fix: What else do you really want to add to the game?

Dickie: I feel Iâ€™ve already surpassed what anybody expected from a 3D mobile app, so Iâ€™m not beating myself up about new additions. You have to be careful because itâ€™s like a house of cards that could fall down if you stack it too high. Every expansion prevents the game working for someone or other, so my priority at the moment is to maintain a stable gaming experience â€“ especially on Lollipop, which has thrown a spanner in the works for many developers. There are 8,000 different Android devices and I have to work hard to accommodate as many of them as possible.

Review Fix: A game like this would be huge for the Nintendo Wii U. Any desire to port it over? Why/Why Not?

Dickie: As much as Iâ€™d like to reach as many platforms as possible, the major consoles like Playstation, Xbox, and Wii are simply beyond my capabilities at the moment. Iâ€™d have to see them become a little bit more open before I publish on there. But more open is the way the industry is going, so never say never.

Review Fix: Do the success of other indie wrestling games the likes of “5 Star Wrestling” and other play a role in what you do with your game?

Dickie: Iâ€™m friendly with all of those developers, to the extent that we have a kind of â€œstableâ€ where weâ€™re supportive of each otherâ€™s efforts. Thereâ€™s no competition because we all have our own domains. 5-Star Wrestling is exclusive to Playstation, Action Arcade Wrestling is on Xbox, Pro Wrestling X is for PC, and Iâ€™m doing mobiles. Weâ€™ve got all 4 corners of the games industry represented, so itâ€™s exciting to be part of an independent uprising! We all have our own way of doing things as well, so itâ€™s interesting to see different solutions to the same problems. 5-Star Wrestling shoots for realism, Action Arcade makes it fun, Pro Wrestling X is driven by nostalgia, and I like to do things on a large scale.

Review Fix: Bottom line, why should someone play this game?

Dickie: Wrestling Revolution 3D is the biggest 3D wrestling game on mobiles â€“ featuring an epic universe of 300 characters and up to 20 of them in the ring at once. It also offers 2 different career modes for either taking shots in the ring or calling the shots backstage. With a unique animation system that allows anything to happen at any moment, I believe itâ€™s a complete package wrestling fans could ever fit in the palm of their hand!

Dickie: Iâ€™ve been watching more MMA than WWE thus far in 2015, so itâ€™s likely that will culminate in a spin-off game. Iâ€™ll be redesigning the engine to have greater control over specific strikes and counters. Itâ€™ll be a more serious and tactical version of what we saw in Wrestling Revolution. But before that, I also have a school-based sequel to Hard Time that Iâ€™m looking forward to finishing. Even that will have more in common with wrestling than you might think.