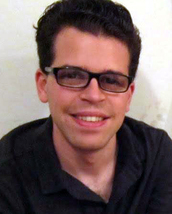 Reviewfix.com sits down with founder and proprietor of â€œCartoons on Filmâ€ Tommy JosÃ© Stathes to talk about his Blu-Ray/DVD â€œCartoon Roots,â€ archiving old cartoons, why animation is important to cinema history, his New York screenings, and cartoon history.

Review Fix: Please describe what exactly it is you do?

Stathes: For the sake of simplicity, I usually call myself a film historian and archivist. To be more specific, I’m an early animation archivist. Rather than simply research history or write books, I’ve spent several years building a private archive of the earliest animated cartoons that were made around a century ago. This means I have hundreds of film reels and cans, and while I’m often researching their history and occasionally writing about them, my work usually entails finding and collecting the films in the first place (many of them are rare or considered lost until found) and then finding ways to exhibit them publicly. I’ve hosted or curated some fifty public screenings thus far, occasionally show material in film history classes, have provided programming to â€œTurner Classic Movies,â€ and am now beginning to get into the distribution of these early cartoons so more people around the world can see them. The combination of all these tasks and activities are sometimes much more than a straightforward archivist, historian, or educator must do in their day to day work, so I’m often wishing there were clones of me to help myself out–but I like to think ‘film archivist’ as an umbrella term still sums it all up pretty well.

Review Fix: Why do you feel these cartoons are important?

Stathes: Like many children, I always loved cartoons. From a young age, I also had an intense interest in history. I’ve always felt that it’s fascinating to know about and see examples of the earliest, oldest example of something that exists. In this case, animated cartoons. To think that audiences all over the world went wild over silent, black and white animation is a fascinating concept, and goes to show what was considered entertaining at a time when there was no television, barely any radio, nor other technologies and forms of entertainment we take for granted now. Of course, many early cartoons still hold up really well as entertainment pieces, and that’s half the fun of working with them and showing them to new audiences.

Review Fix: Why this era?

Stathes: I’ve always been interested in â€œfirstsâ€ and how certain industries or art forms began. As a lover of film especially, as well as cartoons, my intense interest in the first cartoons thus came naturally to me at an early age. It’s very whimsical and charming to me to watch certain animators invent techniques and try to express concepts visually, as well as hone their skills in those early years, without having gone to school for or read books about how to make animated cartoons. Another thing to consider is that a film has to be pretty visually effective in order to convey information, emotion and ideas without the use of dialog or sound effects. Aside from the technical and art-based reasons why I like to focus on this era, the films are also time capsules of the time in which they’re made. I greatly appreciate 20th-century history and it’s fantastic to be able to see moving records (or in the case of cartoons, parodies) of things that were going on at the beginning of the century.

Review Fix: What would you say is the toughest part about archiving, restoring and screening these cartoons?

Stathes: In general, one of the toughest aspects is the poor survival rate of these films. So many of them are considered lost and no copies are easily found. For researchers and hardcore fans, this means that there are many films we want to see and show around, but it’s simply impossible until a rare or unique print turns up. On a personal level, a more difficult aspect for me has always been finances. I don’t come from money and don’t make much doing the work that I do, and since all of this is an intense labor of love, I’ve had to make many sacrifices of pocket change and time to accomplish anything I’ve done. Back to a more general sense, though…archiving and working with these kinds of films takes up space, so someone like me is accustomed to living among film cans. Even worse, sometimes I’ll find a coveted film and it’s suffering from deterioration. That means it might be unprojectable, or it can be saved but will take a lot of time, much more money, and other resources to preserve it in a new professional copy. There is hardly anything casual, simple, or passive about being a film archivist, even if you’re doing the work independently and in the solitude of your own home.

Stathes: â€œCartoon Rootsâ€ is a recent Blu-Ray/DVD release featuring more than a dozen fun and rare silent cartoons, as well a few obscure gems from the early sound era. It includes many of the characters and series which were highly important in the era: Farmer Alfalfa, Koko the Clown, Felix the Cat, Mutt & Jeff, Krazy Kat, Bobby Bumps, and several others. The collection serves three purposes, or so. For general audiences, it’s a great way to familiarize themselves with the first famous cartoon stars that existed before Mickey Mouse and Bugs Bunny. For seasoned animation and film historians, it’s an opportunity to see and own newly restored versions of uncommon films, many of which have not been publicly available for 60+ or 90+ years, depending on the title. Thirdly, it’s a fun and offbeat indie release for any Blu-Ray collector to consider owning. Aside from the cartoons, it contains many extras and an informative booklet in the package as well.

Review Fix: Why do you feel the cartoons on this Blu-Ray were worth putting on among the other cartoons you have?

Stathes: Truth be told, there were some difficult decisions to make. I have hundreds of titles in my archive, so I often have trouble picking individual films to use in certain projects. Some of the films had already been prepared for other projects such as television broadcasts or theatrical screenings, so that made them good candidates for inclusion on the Blu-Ray. I wanted to have a good cross-section of the major characters, animators, series, and studios of the 1910s to 1920s, so the final selections represent certain essentials of the period, while not using the tired old “famous” titles (i.e. â€œGertie the Dinosaur,â€ â€œFelix in Hollywood,â€ etc.) which have been recycled ad nauseam and over-shown in recent decades.

Review Fix: Why are cartoons so important to cinema?

Stathes: At first glance, cartoons are obviously important because of the enormous entertainment value they’ve provided audiences over the past century, even if the genre has been maligned by some, or relegated just to childrens’ fare by others–and on the whole, animation is definitely not all childrens’ fare by a long shot. In a more technical and philosophical sense, animation is a form of filmmaking and storytelling that is only possible in the medium of film. When we watch actors in a live action film, any SFX and CGI put aside, much of what they’re doing can be performed in real life on a stage or on a set. Animation cannot exist outside of the film world, and in a sense, it can even be considered more purely â€œfilmicâ€ than any live-action production. Anyone who quickly dismisses animation does not truly understand animation’s general impact on the medium of film, nor do they recognize the medium’s reliance on animation to express surreal concepts or to enhance live action productions.

Review Fix: What has been the general consensus of your screenings and the Blu-Ray?

Stathes: At my live events, we typically get two distinct groups of people showing up. There are the cinephiles and animation fans, who know quite a bit about film history and either love these films already or are looking to watch ones they haven’t seen yet. Then we get quite a few people from the general New York City area who are not hardcore film people and are just looking for fun and unusual events to attend on a weekend. Based on the feedback I’ve gotten, most attendees in both groups have a good time, and that means they were simply entertained or learned something new through exposure to these films.

The audience for my Blu-Ray, on the whole, tends to be people who readily identify as cinephiles, film historians, or animation lovers. So, in general, consumers are a bit more informed from the get-go as opposed to people from the general public stumbling upon it. However, I do think the format alone means some non-animation enthusiasts are probably going for it just because it’s an unusual release in HD. Many people have written me telling me that they enjoy the set and are looking forward to future collections.

Review Fix: What do you expect for the general audience to take from these screenings and Blu Ray?

Stathes: In my eyes, my screenings and this Blu-Ray collection serve several purposes all at once. First and foremost, my ideal is for everyone to be entertained. Some viewers find the material funny, others find it whimsical and mesmerizing, either because of the content or simply the age and look of the films. In some cases, I hope education is also part of the experience for anyone watching. Whether I or someone else is explaining the history of the films or not, just the visual information within the films alone is educational. Ideas, customs, technologies, fashions, and socio-economic information from specific periods can all be found in these films, and it’s fun to see how a cartoon, or any film for that matter, unintentionally serves as an educational time capsule this way .

Review Fix: Is there anything further youâ€™d like to add?

Stathes: Though a lot of it might sound like fun and games to the casual onlooker, there are many difficulties and struggles involved in doing the kind of work I do. This is especially true as an independent worker without the support of another entity like a museum, archive, or university. Despite those difficulties, it’s still very much a labor of love and a privilege to be able to educate and entertain a global audience through my work. I’m very grateful for all the support I’ve gotten in response to â€œCartoon Rootsâ€ and hope to have more releases out before long. In the meantime, anyone in the New York City area should keep their eyes peeled for my frequent 16mm Cartoon Carnival screenings where we all enjoy these early cartoons shown on â€œreelâ€ film. The mutual vibe of shared laughter and bemusement with an audience makes the films all that much more enjoyable.