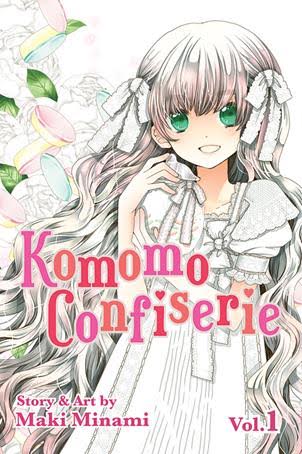 New Manga Series About An Ex-Rich Girl Who Starts Working At A Pastry Shop And Finds Love For The First Time From The Creator Of Sâ€¢A And VOICE OVER! SEIYU ACADEMY

The romantic comedy, created by Maki Minami, about a sheltered but determined girl finding her way in the world after her family goes bankrupt is rated â€˜Tâ€™ for Teens and will carry a print MSRP of $9.99 U.S. / $12.99 CAN. KOMOMO CONFISERIE also launches digitally on September 1st via VIZManga.com and the VIZ Manga App, as well as from the Nook, Kobo, Kindle, iBooks, comiXology, and GooglePlay stores. The series will be published under the companyâ€™s Shojo Beat imprint with new volumes scheduled for release in print and digitally on a quarterly basis.

As a little girl, Komomo Ninomiya delighted in picking on Natsu Azumi, the son of her familyâ€™s pastry chef. Ten years later, when the family fortune is lost and she has no place to live, Komomo encounters Natsu again in her hour of need. Now that Natsu is a master pastry chef in his own right, heâ€™ll help Komomo â€“ but only if she works for him at his new confiserie!

â€œIn KOMOMO CONFISERIE, Maki Minami has created a strong, unique heroine who tackles challenges in her own way including working hard for the first time in her life,â€ says Nancy Thistlethwaite, Senior Editor. â€œBe prepared for a lot of laughs as Komomo and Natsu learn to get along in this sweet new series!â€

Manga creator Maki Minami is from Saitama Prefecture in Japan and debuted in 2001 with Kanata no Ao (Faraway Blue). Her other works include Kimi wa Girlfriend (You’re My Girlfriend), Mainichi ga Takaramono (Every Day Is a Treasure) and Yuki Atataka (Warm Winter). Her series, Sâ€¢A, (published in English by VIZ Media; rated â€˜Tâ€™ for Teens), was serialized in Japan’s Hana to Yume magazine and was also adapted into a popular anime series. Maki Minami also is the creator of VOICE OVER! SEIYU ACADEMY, which is published in English by VIZ Media.

Review Fix chats with Jesse and Justin Gaylie from Fatcat Games, who discuss the inspiration, development and goals for their...