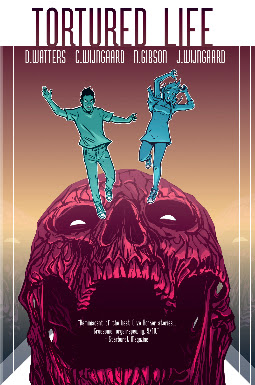 Years ago when Steven Spielberg was making the film â€œJawsâ€ he couldnâ€™t get the mechanical shark to work. Thus creativity had to take over. As a result the trend of never showing the monster began. It must have been a tortuous, happy accident for Spielberg, since in the end his movie showed that a well-crafted story can be centered on a personâ€™s worst fear and make money. In literature and in serial comics you would think that would be an easier task. Just put the epiphany and jump out of your chair moments near the end. After all it should be a matter of cutting and pasting and moving bits around. Writer Neil Gibson does not cut and paste emotional moments throughout â€œTortured Life.â€ Instead, he weaves a narrative that is riddled with tension and horror you cannot turn away from.

This trade paperback starts off in such an innocuous manner you would think that the protagonist, Richard committing suicide would be a completely natural thing. Heâ€™s been severely agoraphobic in his home for over a year and has decided that now would be a good time to die. When reading this you would think that Gibson would take the easy way out and through a series of flashbacks reveal how Richard gets to this place. But that would be revealing the monster too soon. Instead (with Gibson writing the first issue and Dan Watters writing issues 2 through 6) there are a series of moments that leave you as confused as Richard as his suicide is rudely interrupted by an assassination attempt.

What you have in this miniseries is appropriate gore combined with a tension riddled story. Everything is suitably opaque until near the end. Itâ€™s a challenge to write in such a linear way in comics these days and keep the reader interested. Everyone is so used to seeing the monster in the movie trailer or on the blurb of the back of a book that no one seems to care about suspense anymore. Even as Richard questions his own sanity, as the reader you donâ€™t know what to believe and thatâ€™s a good thing.

Equally as important as the writing, the visual to a comic depicting unimaginable horrors and an obsession with immortality must grab your attention without repulsing you to the point where you cannot continue reading. Thatâ€™s what Caspar Wijngaard does. He and his team have created an artistic balancing act that makes characters like The Bloodyman become instantly iconic. Reading it will be reminiscent of â€œThe Empire Strikes Backâ€ where Darth Vader attempts to pull Luke over to the dark side of the force. But itâ€™s not some, half-witted rip off. The Bloodyman happens to be someone or thing with his own agenda. Thatâ€™s what solidly drawn characters do, to remind you of other literary and film characters you like. It means you have an audience who is well informed. And you donâ€™t want to talk down to a reader who can instantly recognize a crux moment. Whenever Bloodyman appears it is most definitely a crucial point in time.

The sad thing about â€œTortured Lifeâ€ is that eventually it comes to an end. However, this means its done its job by leaving you wanting more.