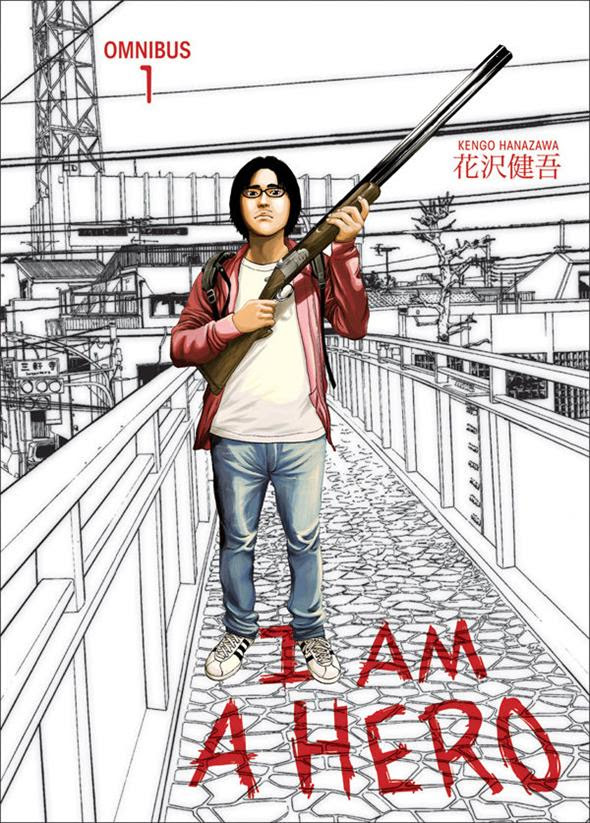 If there’s one genre that’s dying out it’s the zombie genre. Not only is it over-saturated, it seems like they all feel the same. Kengo Hanazawa took the genre and turned it on its head in “I am a Hero,” a zombie story that is beyond anything out there. Available for the first time in America in omnibus form from Dark Horse.

Hideo Suzuki is an assistant to a manga publisher after his own manga was canceled due to being unpopular. He’s also the typical loser despite having a girlfriend and he thinks he sees supernatural beings. Things change when zombies take over Tokyo.

This is a weird zombie story. For one, it doesn’t go into full blown zombie mode until chapter 12. The first 11 chapters are about how Hideo’s life is meaningless. Hideo even goes on rants about the manga industry and people’s perception of the medium. However, these chapters do set up background information on Hideo and the people around him. The problem is these people become irrelevant once the zombie attack happens.

This also makes some people expecting a zombie story to quickly quit. This is a story that takes its time to get to the zombie attack, which is rare in the genre.

Even when we do get to the zombie attack, it’s not complete mayhem like others of its ilk. The most we get are people getting thrown out of windows and a few people getting hit by cars here and there.

Of course, this drastic shift in tone comes out of nowhere and you feel like you’re reading a completely different manga. Once you add everything up, this is one of the better zombie stories out there. This is due in part of Hanazawa actually creating strong, well-rounded characters that we care about. This is something that can’t be said of other zombie stories where the characters have about as much character as a sponge.

The low violence works in the manga’s favor because it’s better to have a strong plot and character development than mindless violence to point where the reader says, “oh, that character died? Whatever.”

The artwork is one of its strong points. Hanazawa went for a more realistic style than the mainstream style people are accustomed to. Since this story takes place in a realistic setting and the characters are supposed to all be adults with full-time jobs it makes sense. Even the backgrounds look realistic. The attention to detail is a great sign of talent.

“I Am a Hero” has a strong story that’s better than many zombie stories and great art. It may be too slow to start for some people, but one you get past that you’ll find a manga that stands above and breaks the mold of two genres.

Review Fix chats with Forebear’s Nick Chamian who discusses the band’s creative process as well as their new single, “Delroy...