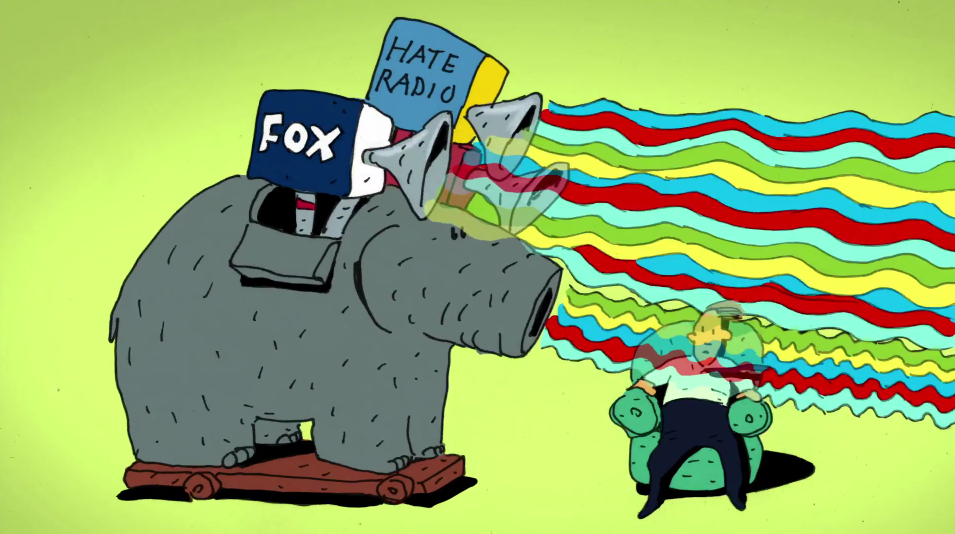 Two of the biggest American creations are 24-hour news channels and talk radio. These creations have also caused lots of arguments between people across every political spectrum. Conservative news media, namely â€œFox New,â€ is a huge target. Filmmaker Jen Senko explores the negative impact of conservative media in her newest crowd-funded documentary â€œThe Brainwashing of My Dadâ€ and the results are powerful and unforgettable.

Senkoâ€™s dad was a very loving, non-political and soft spoken person. When she finally meets him after living in New York for years, she finds that he has become angry, intolerant, racist and liberal hating. She finds out that her dad started listening to conservative talk radio and watching â€œFox Newsâ€ years ago. Jen decided to do a documentary about the negative effects conservative media has on people.

While some people may think that this documentary is nothing more than a liberal using the â€œliberal mediaâ€ to forward a â€œliberal agenda,â€ the documentary actually makes a lot of valid points that is backed up by plenty of research and interviews with experts. Some to note are a document by the creator of conservative media and CEO of â€˜Fox Newsâ€ Roger Ailes about creating â€œFox Newsâ€ and Former President Bill Clintonâ€™s Telecommunications Act of 1996.

Of course, Senko had to find people who are in the same situation as she is. Senko has found and interviewed via â€œSkypeâ€ plenty of people to give their experiences with family members affected by conservative news and talk radio. These statements not only add validity to Senkoâ€™s argument, but they are also pretty tragic. There are some stories where family members no longer talk to each other and even one where the person was threatened with a gun.

As far as filmmaking is concerned, â€œThe Brainwashing of My Dadâ€ succeeds on all fronts. As stated above, it is informative and well researched. It also does a great job of keeping the audienceâ€™s attention by being well paced, being edited professionally and scripted fluidly. Not to mention it, as modern documentaries are wont to do, adds some humor. This is done with animation, mainly of Senkoâ€™s dad getting â€œattackedâ€ by conservative media. In one, we see him sitting in his chair while lots of noise (shown with actual sound waves) hitting him so hard his skin is moving with them.

â€œThe Brainwashing of My Dadâ€ is a well made and well-researched documentary about one of the major phenomena in America. It will receive a lot of backlash from conservatives, but this documentary will create an impact.