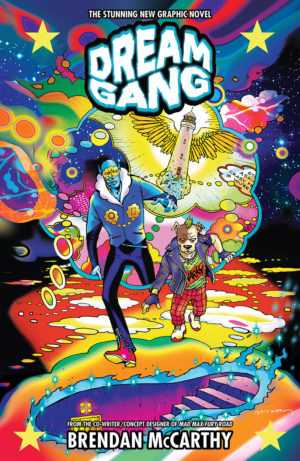 Illustrating the psyche during REM sleep, with the use of vivid psychedelic colors to further demonstrate the episodes of life, Brendan McCarthy, co-writer and designer of “Mad Max Fury Road,” delivers a dose of realization and consciousness through his artistic graphic novel “Dream Gang.”

The opening of “Dream Gang” is similar to an RPG game, as you slowly uncover the past of the main character, a young man who lives in a repetitive colorless life, who drifts into an unhinged dream one night, encountering a group of ‘dream voyagers’ who can travel across dreams and repressed memories. Together, as the Dream Gang, they’ll discover an entity and expose its malicious plans for the dream world.

In comparison to the adventurous LSD trip in “Alice in Wonderland,” McCarthy’s style of illustration places the readers into a crafty perspective of a dream, identifying the real world, as a dull black and white and the dream world as a bright, eccentric fantasy. McCarthy takes readers on a journey by leaving a trail of symbolic imagery throughout his comic to allow readers to have fun depicting the storyline and relating their own stages of life with “Dream Gang.”

The comic essentially revolves around the dream realm, which challenges your imaginations into a multicolored setting. But, the choices of coloring couldn’t be more persuasive, as the novel goes through its climaxes. McCarthy made sure the readers can feel the exact emotions that run through the characters, whether it be the ambiance or mood. Once again, his choice of colors are defining, which is what most average readers should be looking for, to have that connection of relativity with a comic.

“Dream Gang” draws appeal by introducing diverse characters with their own special personas. Each character as an example of the characteristics we choose to use in real life instances; whether it’s to be hopeful, laid-back, stern, deductive, or even bad. Throughout each scene of the novel, McCarthy demonstrates the idiosyncrasy of finding yourself through your past, bringing psychological awareness to readers. It’s an utterly refreshing and thrilling approach to unmasking the subconsciousness of dreams and life.

The further you go into the comic, the easier you find it to apply yourself in it, which is what makes it hard not to be committed to it. Everything was executed exceptionally well and the story captivates the readers into the story, especially with the graphics. This may not be the same as a Marvel comic, but “Dream Gang” has its own unique visual experience and insightful lessons which allow readers to broaden their imaginations and cognitive skills.

Overall, to experience the concept of the comic, you must read it, as McCarthy, continues to innovate with his distinctive psychedelic style.